Whew, where does the time go?

Last night I returned to German class, and have rediscovered the need to start studying the language more. I think that I’ll start doing this today.

I woke this morning and convinced myself to get down into the basement and ride for an hour. This may sound unusual but I’ve decided to replace watching House of Cards with the very first season of The Amazing Race, which I can stream via Amazon Prime.

Since I was a late-ish TAR adopter the first few seasons are new-to-me-tv. I’m only two episodes in but am completely amused how the show had to introduce the rules of the race to the year-2001 viewers, some of the changes to the rules that have occurred in fifteen years, and the way the very first group of players played the race.

Here’s a photo I took on a very chilly walk around Centennial Olympic Park on Sunday morning.

“Let Me Googie That For You” – Atlanta, GA, USA 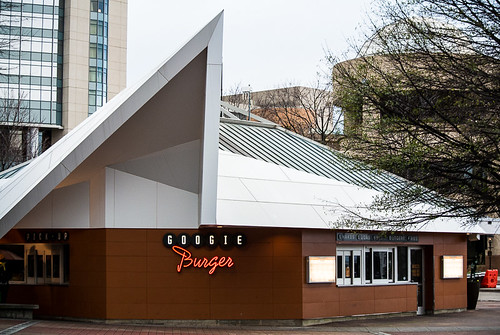 Each and every time I looked at the name of this restaurant in Centennial Olympic Park I read it as “Google Burger”. Brainwashed much?

Tonight will be another lavanderia night. I’m hoping that by doing my laundry tonight that I will be freed up to play trivia tomorrow night.