Not A Stellar Day

There was no way that yesterday would go down on my list of “Best Days Ever”.

About David Bowie
It all started with the news of David Bowie’s death.

I have vivid memories of the 1970s, being a ten-year-old boy in New York, and going over to a friend’s house and listening to music that his older brother was listing to at the time. The two artists that I can recall vividly were Pink Floyd and David Bowie. This music was game-changing for me, who was listening to AM radio at the time. This was my foray into rock and roll music

When I first moved to Atlanta in 1995 I, and the two people I knew here at the time, went to see Bowie perform at the old International Ballroom on Buford Highway; it was the only time I got to see Bowie perform. I honestly don’t remember too much about the concert, but I do remember running into a guy I knew in Huntsville who had also just moved to Atlanta, and him asking me if I was going to see Jane’s Addiction perform at the International Ballroom in a few weeks. I’d not heard the announcement about Jane’s Addiction’s show, so I was quite fortunate to run into that guy on that evening.

Bowie and Jane’s Addiction were the only two shows I saw at the International Ballroom. These shows were a good introduction to my then-new city. Children conceived at either of those two shows will be legally able to buy alcohol this year. Now that’s a scary thought.

Soon I’ll Have More Crowns Than King Louis VIII
At lunch time I drive over to my dentist’s office, across the street from where the Braves will be playing after this season ends. 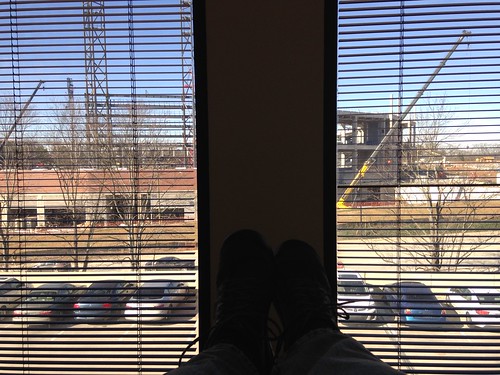 My day got no better when, after a routine dental cleaning and checkup, it was determined that I needed to once again replace a tooth with a crown. Jesus, here I go again. More discomfort and coughing up another $1100 for dental work. I will admit that after seeing the camera images inside my mouth the tooth looks like it has fractures, and after last year’s emergency crown in July I decided to schedule the work.

I Sorta Knew That It Wouldn’t Go My Way
Last night I joined the boss at Lucky’s Burger & Brew last night for the first half of the National Championship game. He, being a Clemson graduate, was obviously quite nervous about the game. Fortunately we were surrounded by more Clemson supporters than Bama supporters.

I have never been a “Pull for the Conference” guy. Therefore in addition to FSU and Miami, I will never root for a SEC team to win the National Championship. And did I mention that my boss went to Clemson?

We left the bar at the end of the first half with the score tide.

I woke up to find that the “other” team won. I know that this makes ITP-Reader Steve happy, but as for me it just capped a day that shall never be considered one of my best.

Looking for a turnaround today, and hoping that I can get up to speed for the start of the next quarter of German classes.

7 Responses to Not A Stellar Day