I spent a lot of time at home this weekend. In an effort to spend less money, and cook more, I made dinner at home on both evenings — using the crockpot. Next weekend I plan to finally try out sous vide cooking with my immersion heater.

On Saturday afternoon/evening I made Mongolian Beef. The recipe, to which I linked, was good if not a little too sweet for my liking.

On Sunday afternoon/evening I made Honey Orange Chicken. The recipe, to which I linked, was a little less successful because the sauce never thickened the way that is shown in their photos.

Both meals provided me with more than enough leftovers to eat for lunches this week. All I need to do is crank up the rice maker that I have at work in order to provide a rice bed for my leftovers.

Stupid me, I should have taken photos of my meals to post to the blog!

Shopping At The “District”
The only time I went out on Saturday or Sunday was to head to Edgewood Retail District. I had to stop into Lowe’s to pick up the rug backer that I had ordered online, and while in ERD I also did a little shopping at Target as well as picking up all of the food from Kroger that I needed for the above recipes. All I needed to do wast to stop into Best Buy, Barnes and Noble, Office Depot, or Bed, Bath & Beyond to pull off the maximum usage of my one trip.

While I certainly have a lot of issues with ERD I cannot complain about doing some one-stop shopping for many of my differing needs. 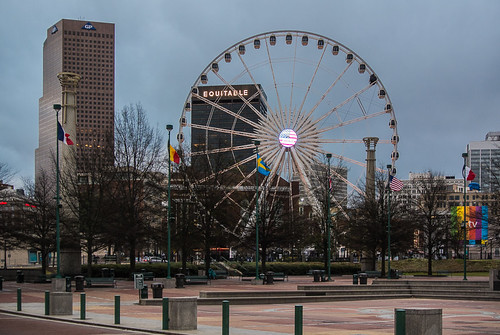 Since you know that only time I left home this weekend was to go to ERD you certainly must know that this shot is from the previous weekend’s journey downtown.

They Scream “I Am A Single Man Who Has Been Alone For Too Long!”
At Target on Saturday I decided to revamp my bedding. For months I have known that I wanted to replace the flannel sheet set that I’ve had for years, mainly because the elastic in the fitted sheet is shot. While in the store I fell for the “spend $50 on bedding and receive $10 off” deal and bought another, non-flannel, bedding set for when the weather warms again. I’ll wholly admit that the sheet sets I bought satisfy a man’s concept of decor, and if I am so lucky to have a women in my life to hate them I will gladly replace them with something else.

Two More Days On The Trainer!
In addition to cooking both days I managed to mount the trainer on each day as well.

On Saturday morning I hopped on for an hour, watching 1.5 episodes of the first season of “The Amazing Race” while riding; I watched the remainder of that second episode while “cooling down” on the couch.

On Sunday morning I hopped on for ninety minutes! I was able to entertain myself by watching two complete episodes of the first season of “The Amazing Race”.

I have finally figured out why I am so transfixed every time I see (a then twenty-one-year-old) Emily on screen as she reminds me of a younger version of Molly Ringwald.

I am about a week’s worth of riding away from finding out who won the very first season of “The Amazing Race” way back in 2001. It’s funny because I am not seeking information about the contestants on the internet because I am trying to avoid learning who won. LOL. All I know at this point wasn’t Emily and her mother Nancy because of the constant wonderment in later seasons about who would become the first all-female team to win “The Amazing Race”.

Once I’ve completed Season 1 I plan to move onto Season 2. And while doing so I am going to try and figure out how to watch “The Great British Bake Off” which was shown on PBS last Fall and finished up early this Winter. At this rate I may never ride outdoors again! 😀

Big Week Ahead
With out-of-town coworkers in our office my week has been turned on its head slightly. I’ll ensure that I can leave the office early enough to go to German class tomorrow night, especially since I finally got around to doing my German homework at about 8:30pm last night, but the rest of the week is in limbo. I even rescheduled my Thursday night haircut appointment because I don’t know how much time I’ll be forced to spend at the office in order to work out some project details. Poop.

Hope your weekend was fantastic.