Another Weekend In The Books

And by “books” I mean some German studying (not enough), pleasure reading (just enough), and YouTube/Amazon Prime watching (too much).

48 Must Be The New 24
It’s official! I received notification granting me Global Entry status on late Saturday night, a full twenty-four hours after I was told that I would receive their decision. As I mentioned on Friday I sort of knew that I got it based on what I saw in my account, but now it’s official.

If I Had A Dollar
On Friday night I attended the Dinner Lab dinner. I made the drive over to the west end area only to be startled to realize that the event was being held in the same space in which I took a photography workshop a little more than six years ago. (I’m not a savant, I had to look into my Flickr archive to find out in which year I took that workshop.)

To my surprise the woman in whom I had interest came up to me, along with her friend, and started talking. They were both very friendly and I was having a good time. To my surprise and delight she was also a nerd, wearing an Apple Watch. I was further surprised when she told me that she was 54 years old. Whoa! And then she let me down by telling me that she would be happy to help me meet other women at the event. Not exactly the thing you want to hear from the person you are trying to meet. Oh well.

Dinner was fun, even if at times I felt like the odd man out (which I was) at a table of nine. Here is the menu we were served: 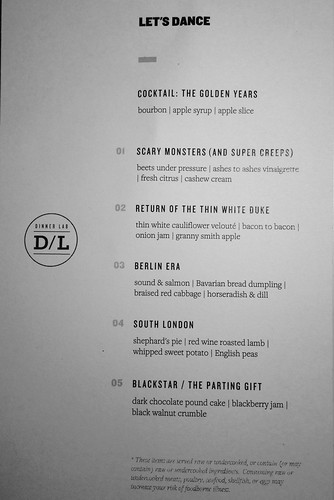 Everything they served us was delicious. My favorite course was the first one, “Scary Monsters (and Super Creeps)”, followed closely by the last one, “Blackstar / The Parting Gift”.

Two Days On A Trainer
On both Saturday and Sunday mornings I put in ninety-minute sessions on my trainer. With a little creative watching I was able to finish watching Season 3 of The Amazing Race. Season 3 will go down as the first season in which I felt the winner was completely undeserved. In looking at the The Amazing Race Wiki for Season 3 I see that one team member performed all but one of the eleven Roadblocks that team faced — the producers made a smart move when they finally realized that they had to force each team member of the final teams to do the same amount of Roadblocks for the race. Oh, and the underserved winner (imo) was one of the whiniest women ever to run the race, threatening to quit often. This team was also incredibly lucky, being saved by non-elimination legs twice during their race. I read in a 2003-2004 blog post that claimed that she gave her winnings to her partner, but I didn’t spent the time validating this claim; it was her money to do whatever she saw fit.

I’m giving myself a day off from the trainer today so that I don’t incur and overuse-related injuries.

Glued To The Tube, YouTube
On Saturday night I made a discovery — the first season on The Great British Bake Off, the real first season of this British show, has been uploaded to YouTube. The first season of the GBBO was only six episodes long and by Sunday morning I managed to watch all six hour-long episodes. Crikey!

Season 2 seems to be a little harder to find, though I know of one place on the interwebs that probably has it available for downloading.

Reconnecting
Yesterday I had a lovely phone conversations with one my best friends, ITP-Reader Tamara. Tamara is also my favorite Canadian (don’t let her know that she is currently the only Canadian I know, however). Fortunately for me Tamara, once an Atlanta resident, will be visiting Atlanta in April. I’m so looking forward to catching up in person again.

To The Germans I Return
Tonight is the second class of my German A2 Exam Preparation class. If tonight’s class is anything like last week’s, and I feel that it may be worse, I have some great strides to make in order to feel comfortable in this class. In the end, the intense training for the German A2 exam may teach me more German in five weeks than I’ve managed to maintain in the past six months, at least that what I keep trying to tell myself…

Hope your weekend was wonderful.

13 Responses to Another Weekend In The Books