This weekend I almost proved that Atlanta could be a walkable town.

Captain “Give Me A (Now-Needed) Break”
About a month ago I thought that I would improve my cycling pedaling by raising my seat a little. All last year I felt as if my seat were only a touch higher I’d be riding better. A month later I have given myself posterior knee pain as described in this Livestrong article.

So I’ll be off the bike all this week, doing the exercises described in the article, and perhaps next week as well.

Captain “Walka Walka Walka”
After doing ninety minutes more damage to my knee, and watching the concluding episodes of TAR Season 4 in the process, I readied myself for getting to “Historic” Old Fourth Ward park for the Atlanta Brunch Festival.

My plan was to walk from East Atlanta to near the Masquerade, which sounds incredibly far; it’s not actually, it’s only about 3.5 miles.

Five blocks into my walk I stopped and reconsidered because even though the temperature was no higher than 50Â°F my stupid body was starting to sweat! I was wearing nothing more than a long-sleeved cotton shirt in addition to pants of course.

I stood in the shade of the East Atlanta Public Library and literally cooled off, and while doing so considered Lyfting to the festival. However when I saw that the estimated Lyft price was $10-$18 (before subtracting my $5 coupon) my cheapness shone and I started walking again. By this time my core body temperature had lowered and I was able to make the journey without sweating (much).

Along the way ITP-Reader Stacy texted and informed me that she and Aron had walked down to Inman Perk Coffee for a pre-festival beverage and asked if I’d like to join them. At that time I was just passing Edgewood Retail District and said “Sure!”. After talking some walking-only shortcuts I was greeted by them in Inman Park not much later.

To cool off (again) I went into Inman Perk to get a (free, thanks to Stacy informing me of a Scoutmob offer which offered a free medium drink) iced coffee. It turned out to be a much-needed drink because the place was packed with humans and rather humid when we entered; this triggered a wealth of sweat from my body. Ew! Drink in hand the three of us then moseyed up the Beltline to the festival.

The Brunch Festival was a good time. The weather could not have been more perfect. We all ate and drank some delicious things, while walking about the grounds. I marveled at the number of people, many of whom were beautiful women, in attendance while waiting in lines to get food to shove food into my mouth.

At 2:00pm we wandered farther up the Beltline where Stacy knew of a birthday party that was taking place. It was a joy to have more alcohol and watch the myriad of Beltliners looking at us as if we were a zoo exhibit just because we were standing around drinking alcohol in a parking lot. Obviously not hashers… LOL! We spent about an hour at the party before wandering back into the Brunch Festival for one more drink.

Here is the birthday cake that was at the party: 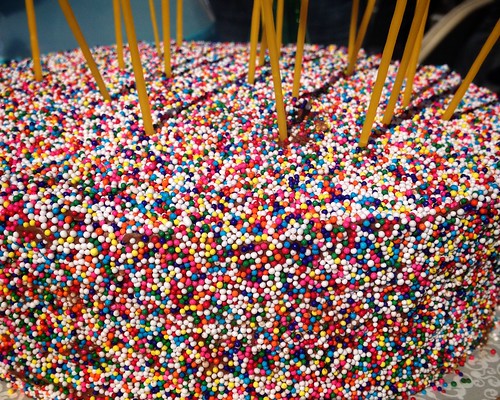 Pity we didn’t stay long enough to see it get sliced.

My plan was to Lyft home, but decided that my chance of getting a ride would be better nearer Little Five Points given that so many others at the Brunch Festival may also be thinking about Lyfting/Ubering.

I am a stubborn mule; once I was in walking mode I could not be stopped.

I was nearly hit by a car as I crossed at a crosswalk: we were at a four-way stop and I swear he gave me the “Go ahead”; he clearly signaled “I’m sorry” with his hands-in-the-air as I started my crossing. It was clearly a miscommunication between us.

I high-fived one of two guys who were standing on the corner of Moreland and Wylie. With my earbuds in I have no idea what the man was saying to me, but he started the high-five so who was I to leave him hanging?

I believe that I played a little air bass as I hiked the final mile of Moreland / Flat Shoals. By this time I was in good spirits, even with my gimpy knee, and was looking forward to being home.

Further points of note:
– I was smart enough to pack, and periodically apply, sunscreen. Yay me!

– Once at home my day long day of exercise and drinking caught up to me quickly as I was fast asleep super early; of course I woke up wide awake far too early on Sunday because of this.

Would I do it again? Probably. I’m not sure though because everything, save my knee, was perfect and I don’t know if it could be repeated.

I limited my mobility yesterday to walking up to East Atlanta Village to eat lunch at Tomatillos. I was going to try one of the new establishments in the “food court” about which I’ve read, but in the end I just wanted a simple but filling lunch.

Captain “Back In The Car Seat Again”
The M6 is supposed to be ready for pickup tonight. However with German class also scheduled for tonight I’ll be Lyfting over to the shop tomorrow morning to pick it up.

Today I need to call the shop to ensure that I can pay for the repairs with credit card. You’d think in this day and age the answer would certainly be “Yes” but from the paperwork I read when dropping the M6 off this may not be true. So if the answer is “No” I’ll need to stop into a bank to get a cashier’s check for the payment amount; this would be the final penance for my stupidity — at least it’s neither freezing cold nor raining today.

5 Responses to Oh Captain My Captain