After a very fun weekend I’ve awoken this morning with a swollen and sore right nostril. I know! Strange, right? Since I’ve never had anything like this previously I’m hoping it’s nothing more that the germination of a large zit that shall be nothing more than a memory in a few days. As my body has a history of strange reactions — see also the current state of my incredibly dry scalp, or my life-long battle with an annoying cyst-producing skin condition — anything is possible. This new occurrence is not immediately noticeable but is inconveniently painful.

Warm Saturday
I spent the majority of Saturday afternoon with ITP-Reader Stacy and Phil. We met up at the ITP Estate and wandered up to Argosy for lunch. After lunch we wandered back to my car where I drove us down to Constitution Lakes Park to walk the Doll Head Trail.

Constitution Lake Park was the start and endpoint for the last hash that I laid many, many moons ago.

We erroneously arrived an hour too early, so, knowing the lay of the park we decided to go on a self-guided tour.

Here is one of the images I captured: 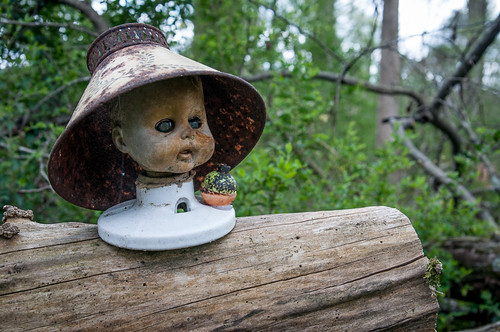 It felt good to have the old Nikon in my hands again. I will post a photo a day here for awhile, if you are friends with Stacy (and/or Phil) on the Facebooks you can see many more, and probably better, photos that they shot using cellphones.

After wrapping up our self-guided tour, and then meeting the official tour guide at the start, we mentioned that we had arrived an hour too early. Curiously the guide said “You must be from up north.” Somewhat confused, I had no retort and just walked away.

After our stroll we parked the M6 at the ITP Estate and then wandered up to The Midway Pub where we shared our photos with one another and had a few beers. In a wonderful bit of symmetry also at the pub that day was “Cockpit”, who was my co-hare for that trail at Constitution Lake Park.

Upon arriving home again I started a crockpot of Slow Cooker Chicken Marsala that I ate as a late dinner on Saturday.

Cool Sunday
It’s a darn good thing I decided that my knee wasn’t ready to ride yesterday because the temperature and winds would have certainly scared me immediately back inside had I chosen to ride. Yikes did the temperature drop quickly overnight Saturday.

I did manage to brave the Publix Half-Marathon / Marathon traffic and make it to Colony Square by 3pm for the 1st Annual Bach Birthday Bash. The bash was about an hour’s worth of beautiful classical music performed by young musicians; first was an eleven-year-old prodigy that played violin for about twenty minutes, followed by a string quartet of high-school girls who performed for about forty minutes. If your thought is “Holy shit, Paulie likes classical music?” I understand. I have an appreciation for many types of music, classical being one of them.

After the bash I drove up to Ansley Mall to get a haircut.

The evening was spent at home, making some rice to go along with my first attempt at Slow Cooker Coconut Curry Cashew Chicken. The meal was good but I have learned never to add as much liquid to a recipe as directed if I want the sauce to be more like sauce and less like soup; the addition of a cornstarch slurry, which is a hack at best in a crockpot since it never reaches a boil, didn’t even help much.

Open Monday
Since my Monday night German exam preparation class has ended I have nothing on my agenda for this evening. I like this, and will strive hard not to plan anything. Wish me luck…

5 Responses to Hoping It’ll Just Be A Big Zit