I Should Have Known

Apparently yesterday was “National Beer Day” or some sort of nonsense. Because of this I should have known that trying to go to a bar would be a frustrating experience. The boss and I decided to use the lighter-than-normal afternoon traffic to go into Brookhaven. It’s been some time since we went to Lucky’s Burger and Brew so we chose that as our destination.

At first I got frustrated trying to park, getting snaked out of parking spaces not once, not twice, but three times!

After finally getting a space all I had to do was step one foot into Lucky’s to know that it was going to be a ball of further frustration, so I turned around and exited. Seriously, there was no a single barstool available, and most tables were taken as well.

The boss and I walked down to Olde Blind Dog where we were also unsuccessful at securing barstools, but we found a table near the bar and sat there.

I was a good boy and limited my intake. I was home before 9:30pm and asleep probably before 10:00pm. 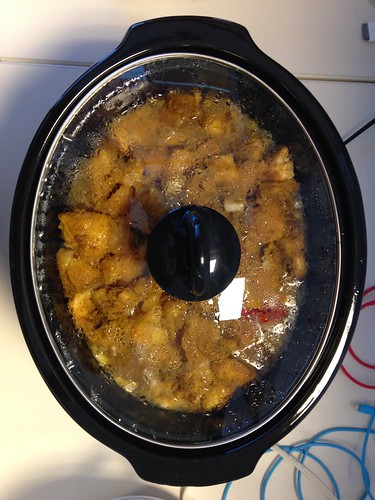 Note: this is the way it looks prior to adding the coconut milk. 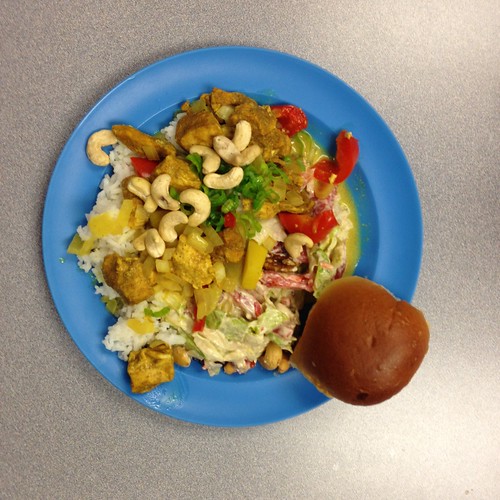 Another blurry iPhone shot, I’m such a shitty phone photographer.

Also included on the dish is a sloppy salad provided, and a roll, both of which were chipped in by coworkers.

The outcome was good, too bland for my tastes however. I also need to learn to add less liquid than is called for since the final product looks like it’s soup.

A Quiet Evening Ahead?
What I really need to do today is leave work and go directly home. At home I need to do German homework, study for my test that is occurring in two weeks, and relax.

Screw You, April!
The weather is supposed to be cold, and windy, tomorrow morning. I am skeptical that I will want to ride my bike in these conditions so I’m considering the alternatives.

I will most likely get breakfast and soccer at the Goethe Centrum, and while there shop their book sale.

Even though I’m certain to get harassed by Allan I will probably also put my bike into the M6’s trunk in order avoid having to drive home prior to driving to Marietta to help out with the roofing. [Barb, please let me know when things are starting, as well as any tools I may need to have with me. I’ll bring work gloves, beer, and a sense of humor.] I’m hoping Allan can give the bike a clean bill of health prior to the start of BRAG Spring Tune Up weekend next Friday (wow, how time flies!).

5 Responses to I Should Have Known