Or so says I. “I write a wildly popular blog” was one of the phrases that I uttered last weekend at BRAG Spring Tune Up. Hey, it was almost true at one point. 😉

A-SS-HO-LE
Apparently another thing I uttered a lot on Friday night was that I was an asshole and I should not be invited back to a Spring Tune Up. For this I can thank the shots of Evan Williams that I consumed, in addition to all of the beer. To make matters worse (or better?) I have no recollection of any of this portion of the night; therefore I think ITP-Reader Barb made it all up just to fuck with me. 🙂 When Barb texted me on Saturday morning and told me that Allan said that I should never be invited back I feared that I had done something much worse, like broken something on their camper. Trying not to be overly-obnoxious is a lot cheaper to fix.

There really should be some sort of support group that does not allow shots of hard liquor to pass through my lips.

ITP Flickr Pic
This was one of two free-standing hearths that we passed on yesterday’s bike ride. 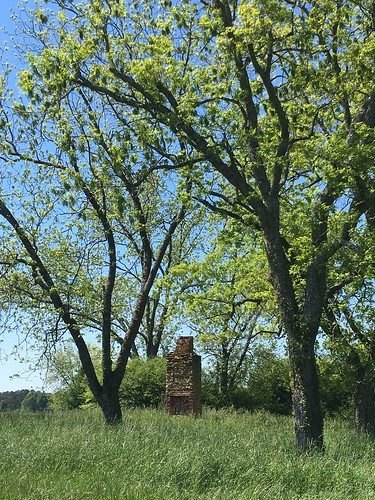 Unfortunately this is also the only one for which I took a photo because there was no place for me to pull off the side of the road as I was driving back to Atlanta, especially with an RV trailing me, in order to shoot the other one. Some day.

The “Home Was Where The Hearth Is” project has returned!

A Little Bit Of Riding, A Little More Sunshine, A Little Bit Of Sunburn, And Too Much To Eat And Drink
This year’s version of rain was wind, and windy it was especially on Friday and Saturday. The wind chill also made the weather feel colder than I believe that it really was. I was not overly-prepared for such conditions but was pleased to have remembered to bring a windbreaker for riding, and a skullcap to wear on the cooler nights.

On Friday we ambled about for approximately 30 miles, fifteen out, fifteen back, and since you may not have been there you can’t deny that we rode into a headwind the entire time.

On Saturday I stayed with the pack for most of the ride, including eating lunch at The Caboose in Rutledge, Georgia and stopping at the Oreo cow farm, where I abstained from alcohol because the thought of Evan Williams was still too fresh. At some point in the ride I splintered off from the pack and lengthened the ride to 42 miles. Something about the thought of all of the riding I’ll be doing this summer convincing me to put more miles on the legs.

On Sunday tiredness, nether-region soreness, and the desire to take it easy won out, and we all did the 28 -mile route.

An “Intimate” Crowd
I don’t understand the Atlanta music scene. Perhaps because it was a Sunday night the “crowd” at Smith’s Olde Bar was scant for the Corb Lund show. I’m admittedly a fan of all-things Canadian (except perhaps for their whiskeys), which is from where Lund and his band of Hurtin’ Albertans hale, but the room was no more than a quarter filled. I could tell that the small crowd disappointed Lund, who described it as an “intimate crowd” at one point. I thought that it was a great show, the last of this tour, well worth missing the other show I had initially planned on attending last night.

And, as an added bonus, I saw the most dissimilar couple I’ve seen since the movie Valley Girl.

He: Tall (over six feet I’d assume), decked in a country attire, with a hipster long beard and handle-bar mustache.
She: Shortish (somewhere in the neighborhood of five feet), decked in a cute black dress, black boots (not country boots), and had a very short haircut with the top dyed blue.

Being the constant singleton that I am I often observe the people around me, and I never would have put these two together in a couple. I hope it all continues to work for them.

The only downer of the evening was the meal I ate before the show. When serving something called “Nashville Hot Chicken” sliders, supposedly to rode the current wave of “hot” chicken popularity, the damn chicken should be spicy. You may rightly guess that mine were not, and no amount of additional hot sauce was going to salvage these.

And So It Begins In Ernest
Wait, where’s Ernest?

Today I officially start my 2016 weight-loss campaign. Long-time readers of this space can recollect my twelve previous years of weight-loss campaigns. My goal is to drop twenty-five (or more) pounds by the time my 51st birthday rolls around in late July (and I take off for RAGBRAI on the same day).

This morning’s weigh-in was 216.6 pounds, which given the amount of calories I ingested this weekend is not that disheartening.

I’ve packed the bike in order to get in a ride tonight. Though I expect repercussions for riding for a fourth day in a row I still need to get out there, turn the pedals, and start losing some weight.

19 Responses to A Wildly Popular Blog