My First Flat Of The Season

I did my best last night, but as has been the case recently my best was not good enough. To my credit I was far less of a hindrance last night than I was two weeks ago, however…

It was on the return ride from the bike shop back to the office that the slow leak occurred. The leak was either a result of me having to maneuver off of a sidewalk, or more probably the result of my front tire hitting a screwdriver in the road that I never saw (it was already past 8pm and I was dog tired as I pedaled up the last big incline of the evening). In fact I thought that I’d hit a stick, but was informed by the two riders behind me that it was a screwdriver.

I rode at least three miles before stopping at a light, and reaching down to discover that my front tire was losing air, about a mile from the end of the ride. I did my best to nurse the bike back to the office before finally giving up and doing some hike-a-bike.

When I finally arrived home last night, past 9:00pm, I did a quick inspection of the front wheel. It looks as if the rim survived unscathed, and the Gatorskin tire didn’t have any obvious damage. I expect to find a snakebite in the tube when I get time to look at it tonight or tomorrow morning. 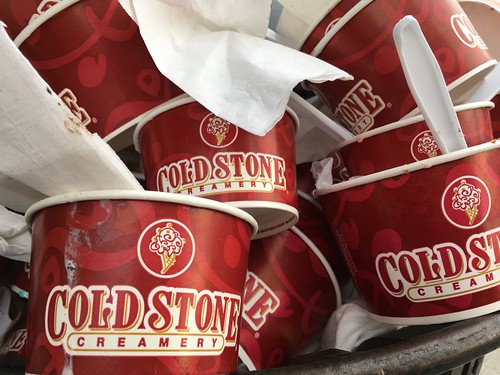 This was a trashcan near the Cold Stone Creamery in the Perimeter Mall area. I passed this when I was walking to Target yesterday. As you can imagine this can was literally overflowing with ice cream cups. Doesn’t anyone eat cones any longer?

When Am I Going To Learn?
Clearly I was far too tired to finish my German homework when I arrived home last night. I know this about myself but I’ve yet to figure out how to get everything done in the week between classes.

And Then I Do This
After German class tonight I’ll be swinging over to Smith’s Olde Bar to hear the band My Jerusalem play. I’ve been a fan of this Texas band for a couple of years now, most noticeably when I saw them play what I considered to be an awesome set of music at The EARL in a “crowd” of no more than fifteen people.

14 Responses to My First Flat Of The Season