Mutha Of A Weekend

Look at me, riding both days this past weekend! In the wind even!

On Saturday I did my first real group ride in a long time; it was the 21-mile ride that leaves from Atlanta Cycling in Vinings. The ride wasn’t too bad, though I did drop my chain at one point and had to scurry back to the pack.

On Sunday I did one of my old routine individual routes, covering 34 windy miles from East Atlanta to Stone Mountain and back.

Both days warranted a post-ride nap.

Take Me Out To The (College) Ballgame
Here’s something to keep in mind if you find yourself going to downtown Atlanta early in May… Are there graduations happening today? Before going to the Georgia Tech baseball game on Saturday night I met up with my boss and two of his aquarium cohorts for some beer at Stats. It was their desire to drink near the aquarium, so I relented. I did put my foot down when it was suggested we sit on the upper deck patio to get some sun — I had already gotten my daily allotment of sun during my morning two-hour ride. Fortunately for me I decided to park near the Georgia Tech baseball field, closer to the Biltmore actually, and MARTA downtown (turns out it may have been quicker for me to walk to downtown than to take MARTA on a Saturday, but I digress) because thanks to two graduations on a beautiful Mother’s Day weekend Saturday traffic was a fucking mess! By the time we left Stats things had thankfully cleared up somewhat.

The boss and I did go to the game, which apparently featured a pro pitching prospect for GA Tech. As Hank and I turned the corner to get to our seats we saw about five radar guns pointed at the pitcher. Hank cracked me up when he asked the guys how fast he was going as he climbed the stairs. 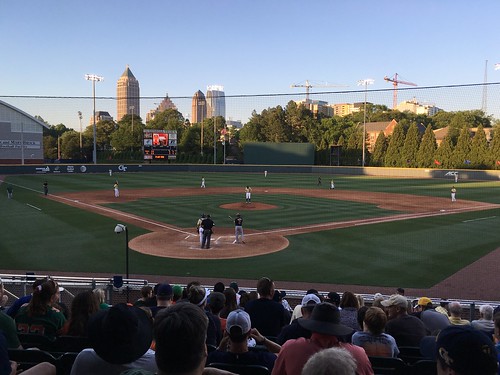 It always amazes me how great $10 seats are at a college baseball game. It also amazed me how many Miami Hurricane fans were in attendance.

We stayed until about the eighth inning. At that time the score was 8-0 in Tech’s favor and they were doing a very slow home plate umpire swap to relieve the man who took a foul ball straight into his mask.

I read on Sunday morning that Tech won 13-1. I love to see UM lose at any sport.

After mowing my lawn (for one of the last times, hopefully) on Sunday I showered and got ready to pack up my things for the lavanderia. Note to self: even on Mother’s Day doing laundry at 4pm on a Sunday is a bad idea. Because I had yet to do laundry I had to wear a pair of brand new underwear, boxer briefs this time, that I purchase from Target on Friday. As I’ve done many times in the past I purchased Fruit of the Loom, Large (36″-38″). I know, I’m fat. I doubt that I’ve put on that much more weight, or that I was retaining water, but I barely fit into the underwear! I even had to break the elastic at the bottom of the legs in order to get them to go over my (fantastic) quadriceps! Ugh.

With laundry done I’m flush with clean, fitting underwear. But, I now need to decide whether or not I want to spring for another package of underwear, this time XL.

It’s Dead, Jim
This morning I had to go to Target in order to buy a CR2025, the ubiquitous watch battery used by many modern-day devices. The device (seemingly) needing a new battery today is the M6’s key fob. I am replacing the battery because twice in the last two days I’ve had difficulty either starting the car, or getting into the trunk. I’m hoping a battery replacement completely ends these problems, else I’ll have a much larger problem dealing with Mazda, car warranties, etc. Wish me luck.

10 Responses to Mutha Of A Weekend