Busy Was As Busy Did

Whew, what a weekend of activity.

On Friday night I left work and drove straight to the lavanderia. It was good to get there at a time when few others wanted to do laundry, so I was able to get my entire loads done quickly without having to jockey for machines.

After doing laundry I went over to Pollo NorteÃ±o and had dinner. This time I opted for three tacos instead of my normal quarter-chicken order. I may have to make tacos my new “usual”.

They Are Washing The Windows With Rain?
To say that I had no idea that it was going to rain on Saturday is an understatement. If not for the fact that I had planned to make a trip over to Warby Parker and IKEA after my all-day German class I would have ridden my mountain bike to Colony Square for the class.

When we broke for lunch I saw water streaming down the windows and said “I guess they are washing the windows today because I don’t think that it’s going to rain.” How wrong could I be? I suppose that I wouldn’t have mattered too much since the rain had passed by the time class dismissed at 3:30pm.

The class wasn’t exactly what I would have hoped for. It was comprised of about 40% of those who have taken German classes previously, and 60% who have not. I didn’t get a whole lot out of it, other than to take to some nice people. Humorously the woman seated next to me was named “Paula” so I accidentally said “Here!” when the teacher first started out asking if “Pau” was in attendance.

As I said, after class I drove over to West Midtown the Westside and went to Warby Parker and IKEA.

At Warby Parker I was able to replace the glasses that were accidentally stepped on at LEAF with an identical pair. While in the store I realized that all of the employees wear glasses and asked what happens when someone with perfect vision is hired. My assumption was correct, people with perfect vision get frames with non-prescription lenses. I wonder wearing glasses is weird to them.

At IKEA I managed to talk myself out of spending $100 for things that would go into the house. I’m still trying to wrap my mind around not adding things to my “collection of things”, as well as pull way back on my spending, given the things I’ll be doing this summer…

With at least two hours to kill before driving to Synchronicity Theatre for “Diary of a Madman” I decided to drive into Virginia-Highland and have a few beers and a burger at George’s. While it doesn’t seem as if that much time has passed, it really has now been many years since I was a Wednesday night regular at George’s.

The play “Diary of a Madman” was slightly disturbing, and really well acted. Perhaps I was seeing myself in the actor of this one-man play. My attention was partially distracted as I started mulling about my finances and future instead of paying 100% attention to the play. Of course the evening ended on a slightly sour note as I had to pay $10 for the privilege of parking. 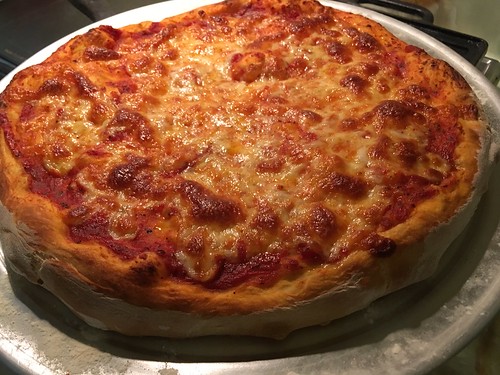 I did it! On Saturday night I stopped into Publix, and after seemingly wandering every aisle and asking two employees, I found the uncooked pizza dough. While there I also picked up a small jar of Classico pizza sauce, and opted for a package of provolone cheese over mozzarella cheese in order to save a little dough. Dough, Get it? Oh, how I slay myself. For some reason the package of mozzarella was about $2 more than the package of sliced provolone. I cut the provolone into small chunks and spread it across the pie, and truth be told, enjoyed the hell out of it.

The pie was a little thicker than I expected. In future efforts I will try stretching the dough out further.

Windy Is As Windy Does
Upon starting my drive home after the play I received a text message from my co-worker Al, “Riding tomorrow?”. I said “Yes, that I was hoping to get a fifty mile ride in on Sunday.” and relented to ride Silver Comet. We started at the Publix near the trailhead. It was a(nother) windy day, and three of us rode together, the third being a guy named Jim who is a really strong rider that Al and I have met on group rides.

At the twenty-file mile point I told the guys that I was turning around, for which I caught some shit from Al about being a stickler for mileage. Al said, “C’mon let’s ride out to the tunnel it’s only two more miles. Don’t you want to see the tunnel?” and I said “No, not really.”

It is at this point I should mention how hard I was pedaling during the first twenty-five miles in order to keep up with these two. At points my heart rate was very high.

I turned around and rode back alone, fully expecting the two of them to catch up at some point, but they never did. Truth be told I kind of enjoyed riding the twenty-five miles back at my own pace. I waited for them at the end, sitting in my camping chair in the shade for awhile, and heard the entire tale when they finally got back.

It turned out that the tunnel was more than two miles out, in fact after riding five more miles out they still hadn’t reached it. To further complicate matters Jim hadn’t eaten enough, nor brought enough food, and bonked.

Al and I had lunch at the Firehouse Subs near where we started and then I drove home.

After taking a serious, and completely unplanned, nap I finally got out and mowed the lawn (note to self: contact Jenka’s yard company!)

And after taking a shower, I made the pizza shown above. I ate half of it for dinner, with two beers, and have the second half for lunch today.

I have my bicycle with me at work today, and hope that my legs hold up for tonight’s “recovery” ride.

It was a busy, yet entertaining, weekend. Hope yours was too.

10 Responses to Busy Was As Busy Did