I sometimes wish the phrase “no sweat” were part of my vocabulary. Okay, I know that sweating is a natural process that serves a purpose, so perhaps I’d like to add “little sweat” to my vernacular.

Five minutes of pulling weeds on this 60Â°F morning had me in full sweat. Much more sweating and I will have to take another shower before I go in to work.

This morning I am waiting at home for the A/C company to come out and assess health of the ITP Estate’s A/C. I was pulling the weeds (ivy, mostly) from around the compressor outside in order to facilitate this process.

And In The End
I wound up suffering a lot yesterday afternoon, but by the time 6pm rolled around my nose mostly behaved. I even employed the Umbrella Principle — you know, bringing an umbrella to ensure that it won’t rain — by buying a small pack of tissues, PapiertaschentÃ¼cher (paper handkerchiefs, which is funny given that “handkerchief” is itself a compound noun made from the words “hand” and “kerchief”) in German, to ensure that my nose wouldn’t run during class.

My scheme mostly worked. The wine may have also lent a hand in curing my running nose.

I’m a little sniffly right now, perhaps I should keep the tissues nearby all day today.

While walking through the parking garage of Colony Square last night I saw this “old” bicycle. 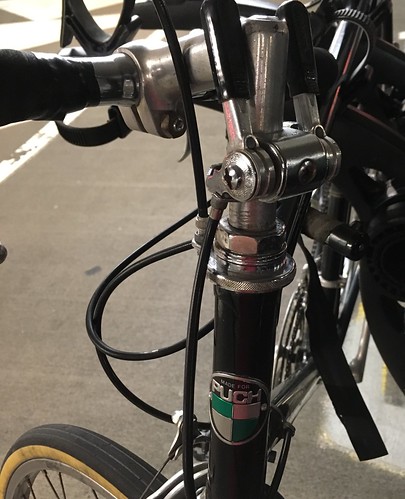 This ride had all of ten gears, five in the back and two up front. Ah the days of having the gear shifters on the gooseneck. I don’t miss those days…

I Started The First Process Of What I Will Be Doing In Germany That’s Not Hashing
My Germany trip next month (next month?!?!) was predicated on doing German Nash Hash. I have also committed to staying in the DÃ¼sseldorf/Cologne area for one extra day to do the Full Moon Hash that will be hared by former-Atlanta-resident Colonel Clit.

Yesterday I started the booking process for a six-night bicycle trip from the city of Mainz to the city of Cologne. According to the Google this trip is 188km (116 miles) long. The route will follow the Rhine River (read “should be mostly flat”). Mainz is only a short train ride from DÃ¼sseldorf/Cologne, but it will apparently take me five days of riding to make it back. LOL. The first night of the trip is an overnight stay in Mainz.

I’m waiting for a callback from the travel agency to ensure that hotels can be secured for each leg of my journey, and to give me a final price for this trip. The base price is â‚¬ 499, but then there are surcharges for me being a singleton, and for the category of hotel chosen. There are two hotel category — “A” which is defined as “3- and 4-star comfortable, middle-class hotels” and “B” which is defined as “Family-owned guesthouses and hotels”; I chose “B”, which sounded more challenging for my language skills. I probably should have inquired as to which of these categories were cheaper.

Goddamn You IPv6
Some people are telling me that my Google/YouTube woes at home are because of AT&T’s poor handling of IPv6. If you don’t have any idea what “IPv6” is, you are lucky.

Riding My Modern Again?
When I do head into the office this morning I will also be toting my bicycle with me in hopes of going out for the weekly Wednesday ride. This lack of rain may be allowing the temperatures to rise, but it also allows me to go out for much-needed bicycle rides.

I need to keep riding because the pants keep feeling tight…

25 Responses to No Sweat