Deja Vu All Over Again

Well, to say that the weekend didn’t go exactly as planned is an understatement.

Saturday: A Comedy Of Errors
After sleeping in a tent on a warm Friday evening I woke Saturday morning feeling well and full of anticipation for a 65-mile bike ride. I wasn’t too concerned that I’d not covered such a distance since last September because I knew the area contained no great mountainous climbs.

I started the ride with ITP-Reader Barb and Allan. We cruised along on a pleasant morning, leaving Hartwell headed toward South Carolina via the Hartwell Dam. It was at the dam that I started my day of mistake making.

First, I turned the brightness of my iPhone’s screen so dark that I couldn’t get it back to where I could see anything. The reason I darkened the screen was to conserve battery for my long ride. The reason I wanted to bring the brightness back up was to take a selfie of me at the dam.

In order to take this photo I had to reboot the phone, killing my ride distance recording, and then find the most shade possible to get the brightness back to a level at which I could see things on the screen. 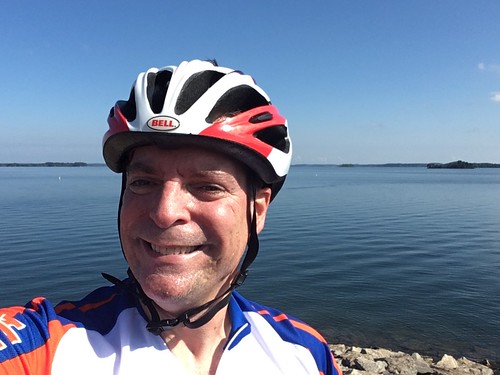 My second screw up came mere minutes later when I decided to take a photo that most people don’t get the opportunity to take, from the dam itself! 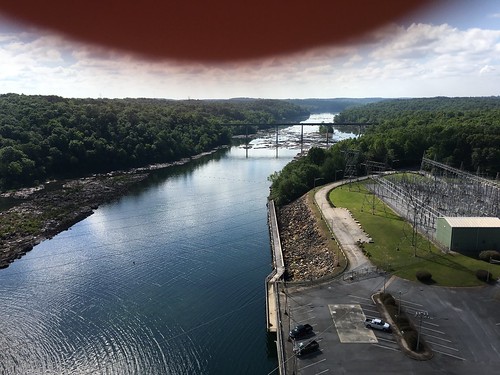 Fear not gentle reader, for that is not armageddon captured, instead it’s one of the nubs that I call “fingers”. Geez, what is this, 1980? Haven’t I learned how to take photos with an iPhone yet?

Over the dam and in South Carolina we tooled along nicely until conflicting marks appeared at mile 25. All day we’d been following the same route for the 39 (yellow), 65 (blue), and 100 (white) mile routes. We were now at the point where I was apparently supposed to leave the nest and fly on my own, even though I swore the cue sheet was the same for the 39/65 through mile 31. But the road markers clearly said else wise, 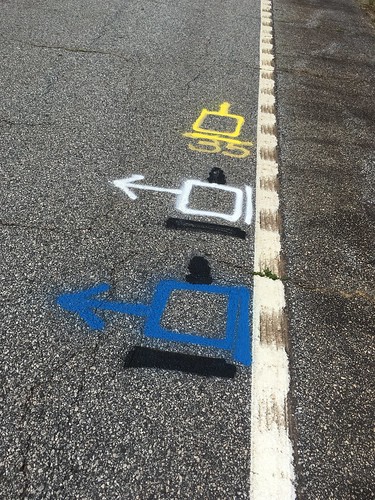 and people who had ridden this ride in the past also confirmed that the 65-mile route veered left.

Feeling good despite now being on my own I cranked along. A couple of miles later I passed a church which looked like a rest stop, complete with riders siting outside, but with absolutely no signage. Since I had stopped just recently, including drinking some beer, I trudged along. I saw four riders going in the opposite direction, none of which questioned my riding, so I trudged along. At rode to the point where my next rest area was supposed to be, but was clearly not. I then compared the lo-res map on the back of the cue sheet to the one the Wahoo! Fitness app was capturing and realized that I had messed up again; I turned around.

When I finally made it to my actual second rest stop, and mentioned my error to one of the volunteers I was told “Yeah, they forgot to fix all of the turn markings at that spot.” My only retort was “Yeah, that was a big mistake.” The man went on to tell me that people were being told to turn around at the rest stop, to which I mentioned that there was no signage so I didn’t stop there. After refilling my bottles with cold drinks and eating a half of a banana with peanut butter on it, I was off again.

It was probably a good thing that I didn’t do the math to see how much mileage I had added.

This gas station seen sometime later in my ride was a harbinger of what to expect. 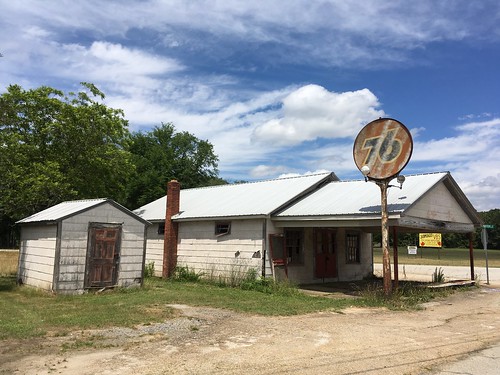 When I found a turn on the cue sheet that was easily identifiable I saw that this turn occurred at the “39.0” mile mark. At this point my Garmin showed that I had pedaled 50 miles, which meant that I had added eleven extra miles and was in for a 76-mile ride.

I wish that I could have captured the look on face of the cashier at Dollar General when I stopped for more water at mile 66. “You doing okay?” She asked. “No bad, I only have ten more miles to ride.” I said. “How far have you gone already?” She followed. (looking at my Apple Watch) “Sixty-six miles.” I said.

Her jaw nearly hit the counter. It was priceless.

When I finally pulled back into camp Barb, Allan, Vern, and Michael were driving out to get barbecue. I was pooped after being out on the bike, and in the sun, for five hours.

I showered and rested in as much shade as I could find.

Barb mercifully brought me back a pork sandwich, that I devoured along with her leftovers.

I spent the rest of the day and night sitting in a chair in the shade drinking beer. At 10:15pm the lone near-by campers asked up to shut off our (not that loud) music and go to bed. Losers!

I didn’t complain because I figured that I should get some sleep so that I could ride in the morning.

Sunday: And That Wasn’t The Worst Of It
On Friday and most of Saturday there was a 0% chance of rain for the entire weekend. Apparently weather forecasters don’t know shit about tropical storms!

I awoke on Sunday morning to the sound of rain tinkling upon my tent. “This will probably pass.” I though aloud in my tent, and then I looked at the radar (that I posted as a teaser yesterday). 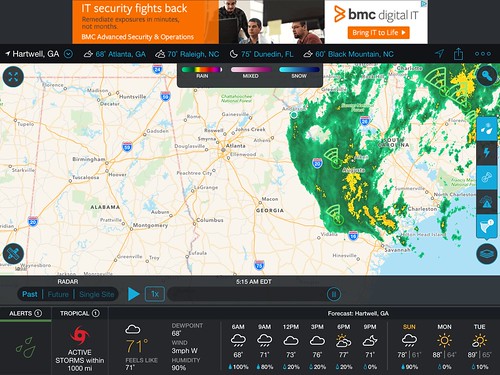 The blue dot at the head of the storm is where we were camping.

Even though the day’s rides were slated to go northwest, away from the menacing rain, I wasn’t up to taking that gamble — especially knowing that I could drive back to Atlanta (where there really was 0% chance of rain) and set up my now-wet camping gear to dry.

“Here I go again, leaving a camping weekend early. This is how I got my reputation as an early departure in the hash.” I thought.

What the hell, “Why should I ride again? I rode 76 fucking miles yesterday!” I pondered.

So I packed up my camping gear and started the drive home.

Feeling a tad hungry I stopped at Shoney’s, the same one at which I stopped on my way to LEAF a few weeks ago, and was sat at the very same table at which I sat then!

It was deja vu all over again.

Monday: What I Did Instead Of Blogging
I woke really early, thinking that it was Sunday.

I got out of bed and did some cleaning/sorting in the house, made/ate breakfast, and took multiple naps, all before finally jumping into the shower at 11:30am.

Later I packed up the M6 with dirty laundry and drove to the lavanderia.

Yesterday afternoon I drove toward Sandy Springs to ride the Monday Night Recovery Ride from Peachtree Bikes, which admittedly I didn’t really need “recovery” given that I had only ridden on one of the two days of the weekend. There were only four of us there last night, which meant that the pace could be increased ever-so-slightly. We covered about 21 miles at a 15mph average, which included having to do one of the inclines twice because our leader had a mechanical issue and the two of us who had reached the top needed to ensure that she was able to continue riding. Surprisingly I wasn’t the slowest ride of the night! 🙂

Hope your weekend was error-free.

16 Responses to Deja Vu All Over Again