My day is off to an interesting start. As I took my bags out to the M6, not wearing my glasses since I don’t need them to perform such a task, I saw something tan in the bushes.

With so many garbage cans in the street I assumed that it was a grocery bag that had blown into my yard, we had rather a storm early this morning. Then I thought it might be one of the neighborhood cats, because it was near where the black feral sleeps. And then, even from a distance, I registered that it was a snout with beady eyes, yep, it was an opossum.

And this from today’s “Skimm” email:

Possum vs. Opossum: Not the same thing. Both are mammas that kinda look like big, fat, rats. But a possum is mostly found in Australia, while opossums are mostly found in North America. So American possums are actually ‘opossums’. Mind. Blown.

Well, perhaps my mind wasn’t blown by this fact but I did think that it was interesting.

Anyway, the opossum must not have liked the looks of me, it must have been a female, and thankfully waddled off my property and across the street into another yard. 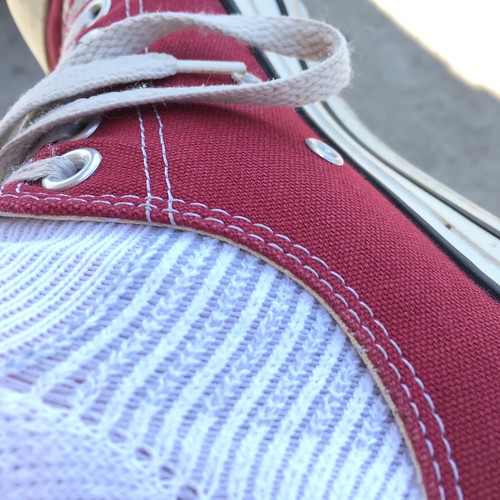 In yesterday’s blog used up all of the photos that I had over the weekend, so I snapped this shot of my beloved cranberry Chuck Taylor sneakers while I sat waiting for my laundry to finish.

Rack’em Up
The bicycle rode in on the back of the M6 this morning. Given the heat and the potential for an afternoon thunderstorm I probably should have gotten my ass out of bed and ridden this morning. But I didn’t. So now I will keep my eyes on the skies and hope that I can get out for 25 miles tonight, you know, as preparation for one of my upcoming Mainz to KÃ¶ln legs.

Speaking Of My German Bike Trip (Again)
All of the t’s have been crossed and the i’s dotted, and, probably more importantly, my credit card has been charged. I now have a complete itinerary in hand including the hotels in which I will be sleeping. It’s almost difficult for me to fathom that I will be flying in two weeks. So much to prepare!!!

Until I am actually on vacation I should probably do some work.

9 Responses to What The What?