When the day arrives when I move from my street, which has apparently arrived for my neighbors, I will (gladly) lose the amount of blogging material that this address has provided for me.

Last night I arrived home to find a man in my front yard, and two more standing next to a car in my driveway. At first I only saw the man in my yard and was going to drive past my house to see if he would leave, but then I saw the other two and the car. So, I backed up, rolled down the passenger window, and asked if I could help them find something. The man said that he thought that mine was the open house, for which he had no house number, that he showed me on his phone. I assured him that it was not, because it was my house, and the men got into their car and drove off. As they were about to pass me they stopped their car, rolled down their passenger window, and assured me that they meant no harm for being in my driveway. I’m not-so-secretly hoping that they do not become my neighbors by renting the house which appears to be cleaned out now.

And Then There Was The Hash
When I walked out to get my mail I saw circular white blobs, fairly evenly spaced, going up and down my street. I walked up to the corner in order to look for a check and while doing this found out that last night’s C.U. Next Tuesday Hash was set by Stan (aka “Lawn Cut Dong”) and started in East Atlanta Village.

Had I not already eaten dinner, and had a little more time to prepare, I might have walked up to the village and run the hash. But alas, I was too full and tired, and wanted to honor my rest day.

Had I had more cheap beer in my refrigerator I would have sat outside in a camping chair in my driveway and set up an impromptu beer stop for the hash. 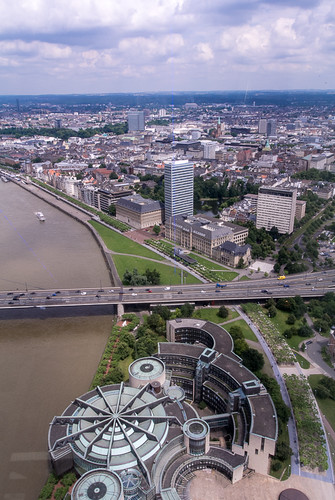 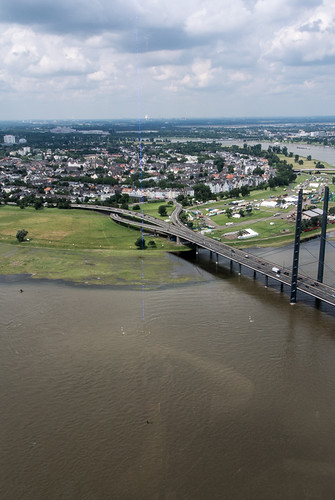 You have probably rightly guessed that these two shots were taken from the DÃ¼sseldorf Rheinturm. In the second photo you can almost see the hostel which hosted the German Nash Hash, as well as the ghost of me taking the photo.

A KÃ¶ln (And DÃ¼sseldorf) I Never Saw
Last night I watched Anthony Bourdain’s “Parts Unknown” in KÃ¶ln (and a short segment in DÃ¼sseldorf) which aired in early June. Had I known about this episode before my trip to Germany I might have done a few different things, and eaten at a few different places. I certainly would have known the difference between KÃ¶lsch and Alt beers before I got there.

Of Course I Won’t Be Able To Afford To Live On Other Streets
Within the last year a new apartment complex, Alexan EAV, opened in East Atlanta. Standing in the former location of an old elementary school, yesterday I saw their sign on the corner advertising studios, 1 bedroom, and 2 bedroom apartments starting at $1350/month. To be fair according to their website their smallest studio apartment, all of 649 ft2, starts at $1145/month.

My mortgage for a 2700 ft2, including $200 added to pay down principle, is $840/month (plus a couple of hundred a month for property taxes and insurance).

If The Rain Holds Off
I’ve brought my bike with me today in hopes that I will get a ride in tonight. After realizing that I am finally starting to lose weight, and that I ate too much dinner last night, I am motivated to ride again.