‘Tis Not The Life I Expected

The 4th of July used to mean something to me â€” picnics, parties, friends, alcohol, fireworks (when I wasn’t too drunk from day drinking to pass out and miss them). I remember a 4th of July perhaps ten years ago when I went over my to my friend Maigh’s to hang out and photograph fireworks. On that night I met her neighbor Meg, who would become one of my greatest missed opportunities. Oh hindsight, you are such a cruel bitch.

In recent years I’ve had no desire to go out to see fireworks, mainly because it’s meant that I’d be doing it alone. While I do many things alone, staring into space alone amongst a bunch of groups of people having a good time has little appeal to me.

I never expected to spend so much of my life alone.

Hope that your 4th of July was more eventful than mine.

GroupRide – Group = SoloRide
“Let’s do the Atlanta Cycling Silk Sheets ride on Monday.” Al said on Saturday. With no other plans in place, I agreed. The ride was advertised with two distances, a 50-miler at “Independence Day” speeds, and a 40-miler at a “more moderate” pace. I am not delusional, I knew that I would be riding 40 miles yesterday because I don’t have the legs nor lungs to keep with faster riders any longer (if I ever could).

The group left en masse at 9am and within the first three miles I was dropped due to a combination of following the wrong wheel and getting caught out behind a passing truck, all while attempting to ride up an incline. Within three miles. I wound up doing the next thirty-seven miles alone, as an out-and-back so that I didn’t get lost. I normally don’t mind riding alone, but when I do I’m usually in a place where I can get help (or a ride) if I have an issue; yesterday it would have been quite the challenge to get back to the church had I had a mechanical problem.

To add insult to an already insulting ride, when I got back to the church I found out that Al completed the fifty-mile route ten minutes faster than my solo forty. I realize that there are benefits to peloton riding as opposed to solo riding. Regardless, I’m old, fat, and slow, and ready to give up on non-recovery group rides â€” unless a miracle occurs. What’s the point of going to a group ride if I am going to get dropped immediately and ride alone? I can ride alone from my home.

The only positive takeaway was that yesterday’s ride marked five consecutive days in the saddle (I’m taking credit for being in the saddle on Friday when I did Spin class); that’s every day since I returned to the US of A! I’m taking today off as a much-deserved rest day. 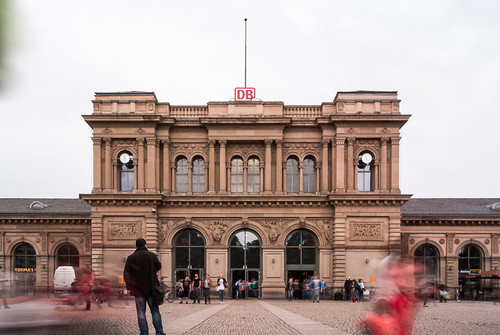 Mainz was the town from which my cycling adventure launched and the Mainz Hauptbahnhof (main train station) is where I landed first.

In this photo I tried to use a long exposure to make the people who moved look ghostly.

I am finally getting around to editing and uploading my shots from Germany; expect to see at least one a day for the next few weeks.

Other Tidbits That I Missed Yesterday
While riding along the Rhine I saw lizards (sorry, I couldn’t determine what type of lizard they were). I was surprised by this because I would have assumed that Germany is too far north to support lizard life.

I have put in a hotel reservation request for Eurohash 2017 in Vienna, Austria from July 7-9, 2017. The event seems so far away, but if I’ve learned anything in my life is that time flies and I better start preparing for things better than I have in the past. Once the actual 2017 Tour de France stages are posted I will start contemplating flights and hotels in Germany to watch at least one of the first three stages.

Speaking of le Tour, I’ve paid $30 to NBC Universal for the streaming rights to my iPad for this year’s Tour de France coverage, but I’ve yet to watch much of the Tour. Why? Because I’ve been on my bicycle during the airing hours each of the past three days.

And speaking of Germany and France, these two countries will face off in the semi-final of EuroCup 2016 on Thursday. Unfortunately the game will be played at 3:00 EDT, otherwise I would see if the Goethe Zentrum, who shares office space with the Alliance FranÃ§aise d’Atlanta, is showing the game and go watch it if they are.

I’m headed back to my doctor, this time to have a look at my sore throat that started about a dozen days ago; it refuses to heal itself.

Dave (aka “Public Enema”) sent out an email about his Cheesy Yellow Tour de France gathering on Sunday (8am, bring running shoes or bike), which included their new address. I’m all set.

This morning I emailed Franklin asking for more details about out RAGBRAI departure (I am now fully paid up after forgetting to send in my balance due in June). He is out of office until July 17th? Yikes, that’s a mere five days before we are supposed to leave!

13 Responses to ‘Tis Not The Life I Expected