Sorry, today’s title is a bad pun on the word “Sidelined” since my eye did just that to me last night. While my puffy/swollen right eyelid did not get significantly worse yesterday, it also did not get any better. Because of this I decided to pull the plug on my much-needed afternoon bike ride, fearing that a couple of hours of sweating and wiping with sweaty gloves would be worse for the eyelid than not doing this. My body’s maladies frustrate me constantly.

I was hoping that I’d be able to get home at a decent time and start to take care of the many outstanding issues that are present inside the house, but alas, traffic sucked again and I was forced to wait some of it out in the Perimeter Mall area.

This morning my eye is actually worse, redder and more swollen than it was yesterday. If it’s still bad either tonight or tomorrow morning I will make my third visit to my doctor in the past six weeks. Yeesh! 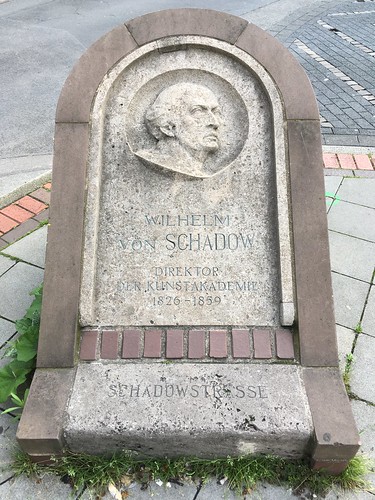 Monument to Wilhelm von Schadow for whom SchadowstraÃŸe, where this photo was taken, was certainly named.