Just like those skinny guys riding around France this not-so-skinny guy is taking a rest day from riding. After three days of riding I deserve one, not that I will get one next week whilst I tool across Iowa.

Too Many Rest Days From German Studies
I’ve quickly fallen back into the bad habit of not getting my German homework done and will be scrambling to get it done before class today. There is something odd about how quickly the week passes, especially when Saturday rolls around and I realize that I’ve not looked at German since Tuesday. I will be taking my German book with me to Iowa, though I’m not sure how much time I’ll be dedicating to learning… I’d love to take the eBook version with me but it’s installed on my large iPad and I don’t think that I can also install it on my iPad Mini. I tried doing this before leaving for Germany and failed. Argh. The iPad Mini is such a convenient device when traveling, but perhaps I will relent on this trip and take the bigger one.

ITP Flickr Pic
Dipping back into the photos snapped in Deutschland… 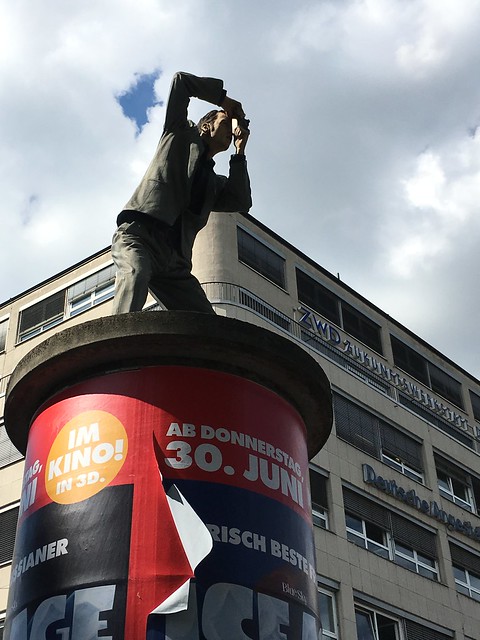 I found a couple of odd statues in DÃ¼sseldorf, each of which depicted people who are dressed as if they were living in the 1950s. This one stands outside DÃ¼sseldorf’s main train station and shows a man using a camera to take a photo the train station.

Fun Evening With Friends
I drove over to ITP-Reader Barb’s and Allan’s last night to find Allan putting some finishing touches on the Shed Mahal’s interior ceiling; that project is shaping up nicely.

When Allan was done with all that business he took to cleaning the heck out of my bicycle, and when it was dry giving it a thorough once-over, including replacing some of the cables as well as my handlebar tape. I’ll try to give it a good test ride tomorrow morning.

We three ordered Tasty China for dinner, Barb being the gracious host picked it up and brought it back to her house, and then I proceeded to gorge myself on Dan Dan Noodles, Bamboo Fish, and Twice-Cooked Pork. Damn how I love that Szechwan food. While we ate and drank I got to hear about their trip to Virginia and pick up some sage advice about what to expect next week while I do RAGBRAI.

Speaking of my upcoming journey, I think that I am all set. Well, once I get all of my clothes washed and packed. The head honcho of BRAG, Franklin, has sent out an email with the trip’s details so I finally feel a sense of confidence about this adventure.

I’m Going To Be The Busiest Unemployed Ever
In addition to a week spent in Iowa, Vermont, and Colorado, I will be attending a two-day conference called Plywood Presents here in Atlanta in August. I also have plans to drive to Florida to visit my mother, and to Raleigh to visit the Raleigh Royalty. On top of that, I have three programming books to read, and eighteen Stanford lectures on Swift programming to watch, as well as numerous pleasure books that I’d like to get to read. Oh yeah, throw in German studying, bike riding, and house projects, and there goes my six months in a blink.

10 Responses to Another Rest Day