After waiting out what was thought to be the only rain of the night I made my final trip to Turner Field, only to watch a heavy downpour occur again after four innings of play. Event without a job commitment I didn’t want to wait around for Mother Nature to finish her business.

ITP-Reader Bob, were you able to drive last night?

A check of the score this morning revealed that the Braves came back from a 6-1 deficit to defeat the Phillies 7-6. 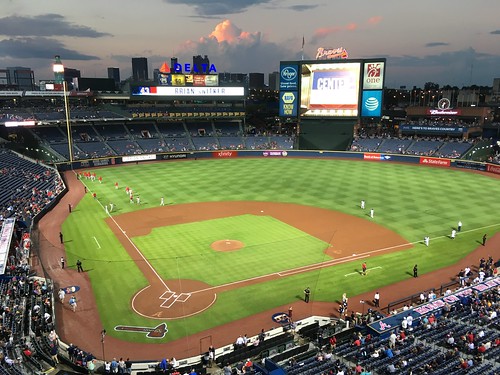 From the purchased seat. After drying the seat I expected a cool and dry evening. I was wrong.

“And Then The Rain Came” (Atlanta, Georgia, United States) 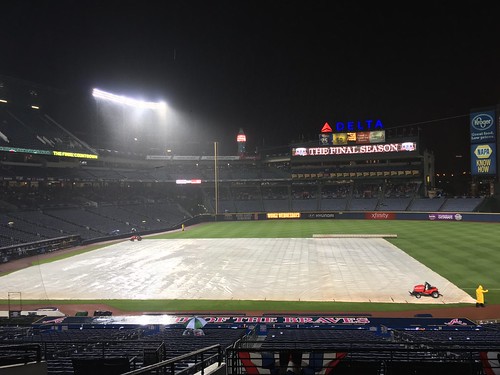 From the section into which I wound up, because no usher last night really cared where anyone sat. I like that I was able to capture “The Final Season” in the background.

Hey, That’s Bobby Cox
While walking up to a stairwell to the 400s section I saw Bobby Cox let night. If not for a couple of autograph hounds I might have gone up to him and said hello…. but probably not.

Lunch On The Final Week
The Atlanta office officially closes for business at week’s end. Today I’m going to have lunch with a few of the coworkers who are officially going to become former coworkers at that time.

We will be eating at Minas on Delk Road, ITP-Reader Barb if I didn’t think you’d be bored silly by our office talk I would have invited you. Funnily I always thought that this place was called Mina’s, and I summarily confused ITP-Reader Al, who is from Brazil, and correctly knows that the restaurant is named for the Brazilian state “Minas” and not for a woman named “Mina” as I thought.

Regardless, it’s going to be an awesomely filling lunch.