Lisa and I were walking fools yesterday.
We walked to Mitch’s Tavern (holy shit some NC State student need to create a new webpage for the bar!), which was finally open, for lunch.
We walked back to her house to drop off her leftovers.
We walked to the boys’ school so that Lisa could volunteer for a half-hour at the school’s book fair.
We walked back to the house so that we could get the minivan to pick the boys up from school.
So. Much. Walking.
It was enjoyable.

When Not Walking
Lisa and I made a Trader Joe’s and Target (see followup to yesterday’s blog post below) run before lunch.

Last night both boys had swimming practice, so Lisa, Randy, and I took advantage of this by walking from one of the pools to Drink Drank Drunk for an adult beverage.

By the time we got home the boys had to go to bed, and the adults finally ate dinner shortly after 9:00pm. 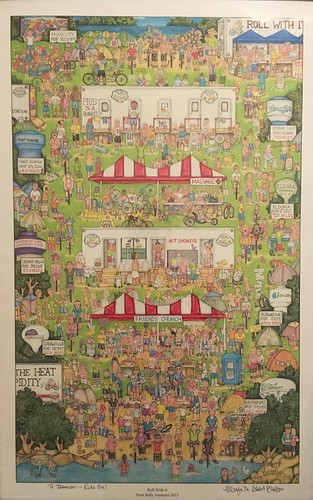 This poster, depicting the madness that is both RAGBRAI — (The Des Moines) Register’s Annual Great Bike Ride Across Iowa — as well as camping with Pork Belly Ventures, was hanging in one of the bathrooms at Carolina Brewery. The brewery’s owner is a former road rider, and apparently so are some of the employees.

Current Status: Endangered
Rumors have started to spread that the grand old bowling alley depicted in yesterday’s blog is going to be replaced by a Target.

So Much For Finishing High In The Rankings
Another frustrating week for me in the Yahoo! Pick’em Pool. Though I did manage to correctly pick eight games correctly, and outscore my side-bet opponent (making us now 2-2), what appeared to be a high-ranking finish for me did not. Apparently many of the people in the league had much more confidence in Minnesota’s ability to beat the Giants last night, so my second-place position degraded into a seventh-place position at the week’s end.

Even worse, I’m still sitting in ninth place, out of fourteen players, overall at the conclusion of four weeks.

Headed Back To ‘lanta
As you read this I am most likely on the road (I-85) returning to Atlanta. Gone are the days when my employer would fly me to Raleigh for the NC State Career Fair, to stay are the driving days. But I like to drive, so I’m not complaining.

Loaded into the M6 are all the things, including my book bag for German class, which starts tonight.