Beginning Of Another Week

Another weekend of beautiful weather. We should enjoy this it while we can.

ITP-Reader Steve, sorry I didn’t make it out for the Highland Games this weekend. FWIW – I also missed the L5P Halloween Parade and the Decatur Beer Festival.

ITP->OTP->ITP
On Saturday morning I drove my bicycle up to Vinings to do the 10am group ride out of Atlanta Cycling with ITP-Reader Al (and others, of course); I was summarily dropped within the first three miles. Al, who does this as his second ride of the morning, was able to keep up. Judging by my skill level, or lack thereof, the pace was fast; I believe this was because the group was not that large. I did manage to find the shortcut this time, and had the privilege of being passed by almost everyone again by taking it. This could very well be my last group ride attempt of the year as I will be traveling again this weekend, and the colder weather will start to arrive, therefore I will shrink like a violet and return to indoor rides.

After the ride I was treated to lunch by Al at his house. En route he picked up a boatload of delicious barbecued meat from Righteous ‘Que in East Cobb. I ate with Al, his wife Raquel (with whom I also used to work), and their kids. The lunch certainly improved my attitude after my struggles with the ride.

I returned ITP, and remained here for the remainder of the weekend, around 2:30pm. At the ITP Estate I cleaned up and then hailed a Lyft to take me downtown where I hung out at the Marriott Marquis. The Marriott Marquis was the end point for the Atlanta 2-Day Walk for Breast Cancer. As ITP-Reader Randy and I discussed in Raleigh when I was last up there, I feel this should be named “Atlanta 2-Day Walk Against Breast Cancer” given that we are fighting against it, and not for it. Pedantic much? 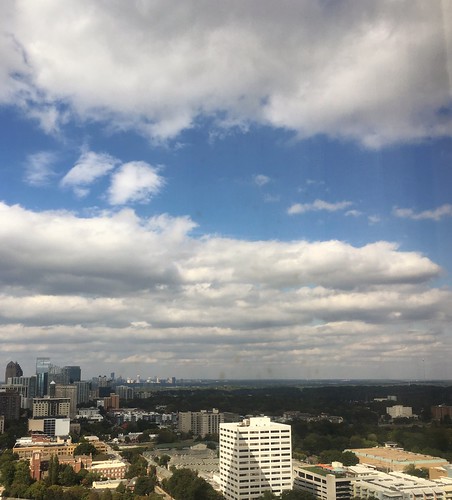 Taken from a room in the Marriott Marquis. The dirt spots were on the outside of window, not on the iPhone’s lens.

As I found out yesterday not only did the Marriott Marquis host the Atlanta 2-Day Walk for Breast Cancer it was also the home base for a meeting of the Nation of Islam this weekend. Busy busy.

I took the hook on one of them, Detectorists. The best way to describe this two-season series, for which I have now watched the entirety of the six-episode first season, is to steal the blurb from the email:

Detectorists comes on slow, but wins you over in the long run. Essentially, the show revolves around two unusual members of the fictional Danebury Metal Detecting Club, Andy Stone (Mackenzie Crook) and Lance Stater (Toby Jones). The show has them seeking buried treasure along lost Saxon burial ground and deal with the day-to-day goings on of the club and everyday happenings of life. Itâ€™s quirky, genuine, and makes for a solid, binge-worthy watch.

Detectorists is typical Bitcom with dry (almost nonexistent) humor, it’s slowly paced, and you don’t reap the entire reward of watching it until you’ve seen the entire season.

Look, I can’t find any more of The Great British Bake Off online, I have to watch something…

The NFL Confuses Me
I believe that my football prognostication skills have dried up much like my cycling skills have. At the end of tonight’s Jets loss to Arizona I will have only correctly picked eight of the fifteen games played this weekend.

No Pressure
I have a job interview today.
I hope that my software development skills have not followed my cycling and football prognostication ones.
No pressure.

Have a great day friends.

5 Responses to Beginning Of Another Week