No Pep In My Step

Yesterday I felt as if I were stuck in molasses and could never get started on anything. All day and night I tried to convince myself that doing my German homework was a good idea, but it never happened. Today I suppose I should get it done, you know, since I have class this evening. It’s a good thing that I voted last week.

Damn You Blackouts!
One of the distractions I tried to employ last evening was watching hockey on my iPad (because I’ve still not gotten my AppleTV hooked up to my not-so-fancy-pants television). My beloved Islanders were playing the Canucks on Long Island in Brooklyn and I was going to start using my $180 NHL live game video season subscription. Then I was told that the game I wanted to watch was blacked out due to a regional/national televised blackout — because the game was being shown on NHL Network. WTF?!?! I thought the whole purpose of plunking down money to watch via the net was to satiate the fans who don’t pay for cable/satellite!

I was also informed that a replay of the game would be available in 48 hours, like I have interest in watching a game for which I already know the outcome. 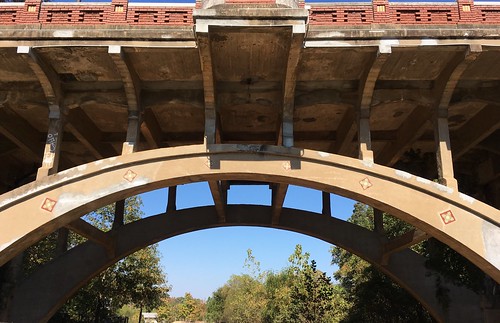 Another archival shot, this one from last week. I really love the little bridge on Park Drive. If I remember correctly it dates from the 1920s.

Lunch Wednesday Or Thursday Downtown/Midtown Workers?
At the beginning of the year I vowed to try and connect with my friends more. I have been doing a bad job of following up on this, especially during my unemployment time. ITP-Readers Stacy and Steve, I propose a lunch gathering. I understand that you two work in different parts of the city, but if your schedules permit I’d like to see you both. If it’s too much of an inconvenience to get the three of us in the same place I wouldn’t mind getting out for lunch on Wednesday and Thursday. If interested, please discuss in the comments. 🙂

What surprised me to find out is that they are not making these comments on the WordPress version of InsideThePerimeter, but rather the Blogspot version. I guess I should figure out how to log into Blogspot and disable comments.

File Under: WTF?
I don’t understand what I have done to warrant the number of bizarre things that happen in my world. Yesterday I went out to the backyard to see how much privet I will be cutting down to remove branches that are near, or touch, the ITP Estate’s roofline. While looking around an area I am seldom in I noticed that some leaves on bushes had white on them. I guess it’s the trained hasher’s eye that spies white on plants… After walking a few feet I discovered a milk jug with dried white paint inside of it. Clearly someone hurled the jug into my yard, and it appears from the marks of paint that it came from my neighbor’s yard. To my knowledge my neighbors have never had any reason to do something like this and the only damage done was to some plants and weeds, so I have no interest in asking them. I just don’t understand.

16 Responses to No Pep In My Step