My goal this weekend was to clean house. I had some success by eating and drinking at home as well as tossing some things that I should neither be eating nor drinking.

The Jackmobile Remained In The Carport
I managed to go all weekend, well Saturday and Sunday, not driving the Jackmobile anywhere.

On Saturday morning I went outside early and filled the ten leaf bags I purchased on Friday. There were two things I knew:
1. I should’ve bought more leaf bags since I still have about 1/6th of the yard to finish (once all this rain passes)
2. It was dumb to do this task knowing that the rain was coming. The only reason I did this on Saturday was because I allowed that guy to start the task on Thursday.

On Saturday afternoon I walked some completed Christmas cards up to the post office in the village.

Here’s one thing I rediscovered:
1. Raking uses different muscles that anything I else I do. I expected my biceps and lats to be sore, and they were, but I didn’t expect my hamstrings and glutes to follow suit. I guess it was all the work they did when I would hold my torso up straight as I dragged the rake from behind me.

I considered going to the grocery store on Sunday morning but decided against it because I will be doing that chore today. Instead I stayed inside all day, watching the final episode of Olive Kitteridge (more on this below), and then the Falcons game. With no real reason to leave the house I didn’t do so, and gathered up more things to take to Goodwill today. You’d think with as many times I’ve talked about taking things to Goodwill that my house would be empty, but I don’t manage to take too much at any one time.

ITP Flickr Pics
As I type this I realize that this weekend turned out to be “Indian Food” weekend. I should have made a batch of naan bread… 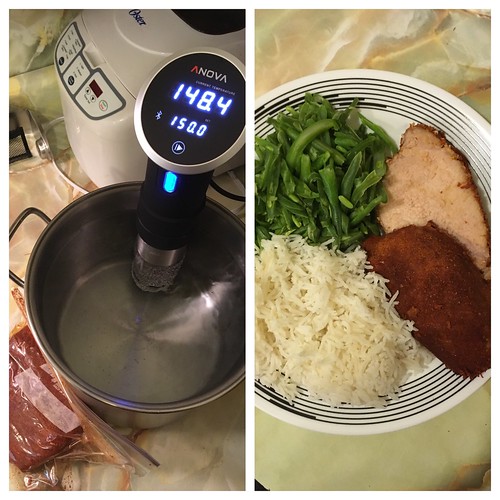 If you had “December” in the “When Will Paulie Finally Use His Immersion Cooker” you win! I cooked up a delicious pork loin that I had smothers in Indian spices. As pictured with the pork I ate some steamed green beans and basmati rice. 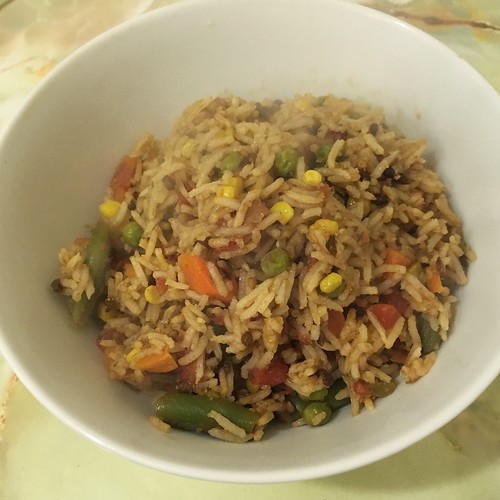 On Sunday I decided to eat at home. The original plan was to make some curry chicken with mixed vegetables and basmati rice, but I determined that the chicken had gone bad, and not willing to risk giving myself food poisoning I switched gears and made a vegetarian “Indian fried rice” instead.

Wrong Mini-Series For This Time In My Life
Preface: It was suggested that I read the book Olive Kitteridge. I checked it out from the library, but never read a single page. When I noticed that a four-part mini-series existed I chose to watch it.

The mini-series is excellent, starring some well know actors such as Frances McDormond and Bill Murray. McDormand’s portrayal of a life-long Mainer was brilliant.

Each part of the mini-series occurs at different parts of McDormand’s life. Suffice to say that McDormand’s character doesn’t have the greatest of lives, some of which is precipitated by her Maine-driven kurt way of dealing with things.

Had I watched this series twenty years ago (which is impossible because it was made in 2014) I would have loved it. At this stage of my life the struggles and pain hit a little too close to home.

The Heat Is On
I finally caved on Saturday afternoon when the indoor temperature hit 59Â°F and the weather forecast for Sunday was sub-50Â°F outside… for the high. I’m glad to say that the heat started up and did its job well.

Monday Is A Chore Day
Weather be damned, I’m going outside today. Here’s my punchiest for the day:
– drop off some stuff at Goodwill (decided to do this later in the week)
– go to the grocery store
– do laundry
– spend some time at the library working on Swift learning (I also have DVDs to return)
– have drinks and perhaps dinner at Lucky’s Burger & Brew in Emory Village to use up some of my bingo winnings, see if I can win some more, and to watch part of the Jets game

Hope your weekend was, and Monday is, great no matter the weather…