I was going to title this “Back That Shit Up Thursday” but changed my mind. Because I’ve overslept this morning today’s post will be follow up, a melange of things that I have been thinking about but failing to get into the blog.

My Eye
Last week my optometrist diagnosed the lump on my eye as a chalazion (if really squeamish don’t click on the link, but if I can handle it you probably can as well). It seems as if mine is bad enough to require an opthalmoligist to perform minor surgery. Turns out one of my German classmates has had one of these removed, so I’m a little less scared of this.

Bar Bingo Tournament
On Sunday December 18th I will be playing the Big Bingo Tournament! The only downside of having a chance to win $2000 just by playing bingo is that I have to drive up to John’s Creek to do so. 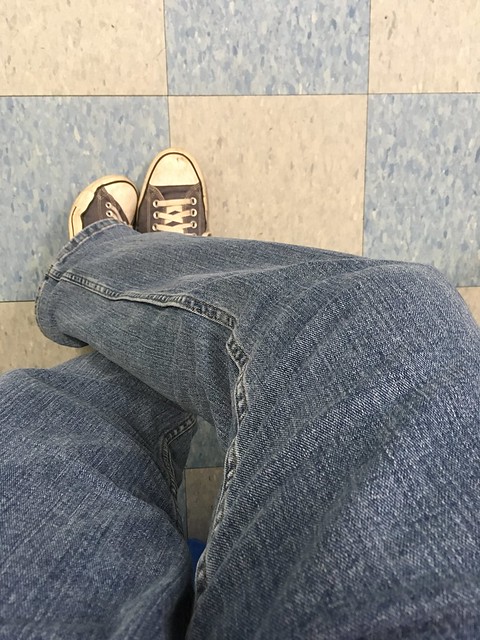 A study in color and white while waiting for laundry to finish. I’ve published a photo similar to this before but the fact that I was wearing “blue” jeans, “blue” Chucks, and standing on a blue and white tiled floor struck me yesterday.

Kismet
Yesterday I did laundry, ate a lunch at Pollo NorteÃ±o, and then drove over to the Chamblee Public library to return a DVD. Feeling a bit overfilled with lunch and deciding that I want read “In Cold Blood” (recall yesterday’s mention of my Very Capote Christmas) I decided to walk from the library down to the used book store (the one with all the cats) on Clairmont.

Clearly a fifty-year-old novel by one of the country’s most famous authors will be available in a used book store, right? Nope. I think that the store had a “collector’s copy” but I just want a plain old version that I can donate once I am done.

After failing I marched the mile back to the library hoping that they had a copy on their shelves that was not seen by their computer system. Nope.

Last night I made jambalaya and took it with the first episode of this season’s “Top Chef” to Betsy’s house. As I was sitting in her living room and we discussed everything that we’ve been doing I mentioned my quest to find “In Cold Blood” when I turned and looked at her bookshelf and saw that she had one Truman Capote book — “In Cold Blood”. Betsy has kindly lent me her copy.

The jambalaya was not my best, it was good but might have gotten me kicked off “Top Chef”. Hell, I was so confident in my making of this dish I actually forgot an ingredient, the bay leaves. Oops.

A Return To Trivia
I was able to reschedule my ticket to “Courtenay’s Cabaret Home The Holidays” at Hertz Stage of the Alliance Theatre so tonight I will be joining ITP-Reader Stacy for trivia instead. Woot!

A Day At Home
Other than going out to play trivia I’ve decided to stay in today, no lunch out, no library, nothing but writing this blog post, doing German homework, watching the Dorothea Lange documentary that I fell asleep watching last night, and studying Swift. No matter where you are make it the best day you can!