On The Road To Nowhere

I cleaned out my kitchen utensil drawer the other day, as you do in order to avoid the things you are supposed to be doing. In the drawer I found six bottle openers, five of which had the capability of opening a wine bottle. SIX! Jeez Louise I never felt so much like a hoarder. From where and when did I accumulate all of these?

No Snowpocalypse
Well that was certainly a dud, wasn’t it? I stayed at home on Friday, keeping an eye on the weather to see if my Saturday plans were going to be canceled. In doing so I (re)watched The Incredibles.

As is the case so many times when a snowstorm is predicated in these parts we got none, but as you probably know we did get some ice.

When I went outside Saturday afternoon to get the mail that I failed to bring in on Friday I saw how dry the roads had become, thankfully, so I was able to go out on Saturday night. On Saturday night I drove over to Betsy’s house for dinner and some Top Chef watching. On the 1.4 mile drive I saw one small patch of ice on the roads, everything else was bone dry.

ITP Flickr Pic
“When The Temperature Drops I Put This On And Remember How Good We Have It” (Atlanta, Georgia, United States) 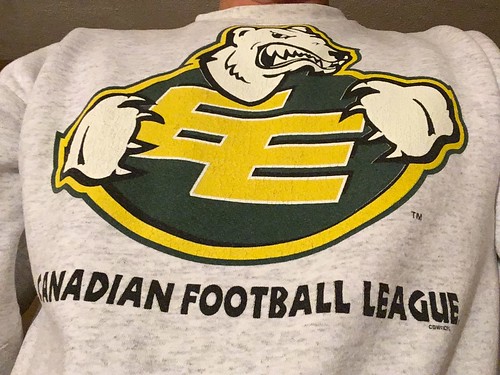 A gift of many years ago from my old friend ITP-Reader Tamara, who is Canada’s Representative to Inside The Perimeter. I wear this anytime the temperature in Atlanta makes me think of Canada.

Spinning It Up Again
On Saturday I also replaced the rear wheel on my bike and put it onto my trainer. Sure, I’m still waiting for my speed/cadence sensor to arrive, but in the meantime I’m riding with entertainment to make the drudgery bearable.

I spun for an hour on Saturday and an hour and fifteen minutes yesterday. In the process I started watching Season Five of “The Amazing Race”, making my way through the first three episodes. Huzzah!

Based on how my legs, and nether regions feel today, I might be taking a “rest” day today.

Good Old Home Cooking
I have been doing well eating at home, or in the case of Saturday night eating food prepared by someone else. In the past few days I’ve eaten a bunch of leftovers and yesterday I cooked up a little chicken to go with the potato leftovers that I brought back from Betsy’s.

I’ll be bucking this trend tonight by going up to The Prado and meeting Hank and a couple of other former coworkers at the Taco Mac there to watch some of the Championship Game. Hank is a Clemson graduate and I know one of the others will be a Bama graduate, so this will be interesting. Perhaps I will wear a Florida Gators shirt to let everyone know that I have no horse in the race.

Hope your weekend was great! (ITP-Reader Barb, not being on The Face Books I have no idea how your return trip went, if it even went at all.)

10 Responses to On The Road To Nowhere