As I mentioned in yesterday’s comments my phone interview went fairly well. The next step is for me to perform a coding exercise so that they can see my work. It’s only Thursday, but think that my weekend will consist of coding and football watching.

Oh The Weather Outside Was Delightful
After my interview I was charged up and needed an outlet for getting exercise. A quick look at the weather convinced me that I should head outside and ride in the real world instead of on the trainer in the basement.

As I rode from East Atlanta toward Kirkwood I once again stumbled upon hash trial, this time from the last Wheelhopper, which I quickly deemed since the marks were far apart and lead me a long way from where I saw my first mark. The trail even used that small single-track path that I had stumbled upon a while ago when out riding. 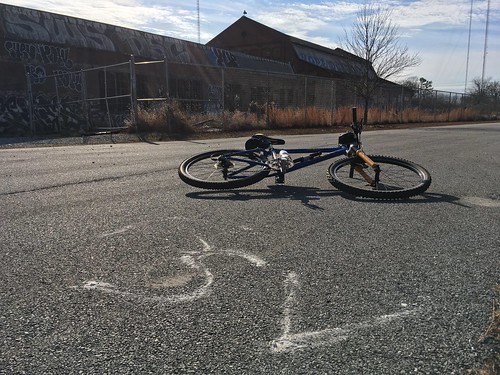 I followed trail for awhile, losing and then miraculously finding it again out of nowhere about three times, before deciding that I should head home.

On a jag I took to add mileage and time I rode past the location where I took this photo back in November (geez, it doesn’t seem as if I took this shot nearly two months ago): 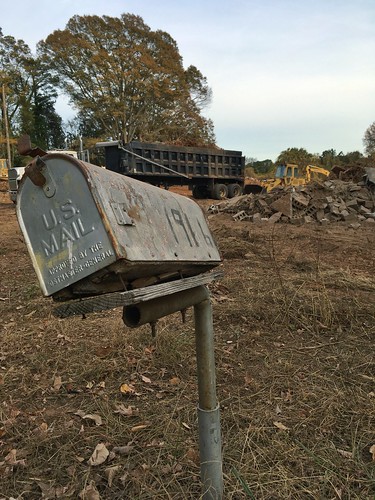 and saw the sign outside that the houses to be built there will be priced FROM THE 450s; for houses in southeast Atlanta that abut I-20? Doesn’t anyone else remember the housing crisis of 2008?

Crocking In The Kitchen
When I returned home from cycling I was greeted with the lovely aroma being released by the food in the crockpot. I was headed to Betsy’s house for some Top Chef viewing and she was a willing guinea pig for my attempt at this simple recipe for Garlic Herb Chicken and “Dumplings”.

Hot damn it as tasty! I will certainly make it again at some time.

Here are a few tips if you decide to try this recipe:
– A 4-quart crockpot is not large enough. You will think that it is, but then forget you are going to cook biscuits in it as well, which will swell and force some of the liquid over the sides.
– If you use Pillsbury Grands biscuits, you will only need one tube.
– I used thawed, plain chicken tenderloins instead of frozen, “garlic herb chicken” as described in the recipe; there was no loss in flavor.
– I didn’t want to buy a canister of grated parmesan and I happened to have leftover shredded parmesan from last week’s crockpot soup night at Dean’s, so I used that instead.
– I don’t know what “garlic pepper” is, so I used 0.5 teaspoon of black pepper and 0.5 teaspoon of garlic powder instead.
– I omitted the addition of sharp cheddar cheese, to me the dish already had enough flavor and didn’t need the addition of a second type of cheese.

With the crockpot of chicken and dumplings I brought over a bag of frozen broccoli florets that we steamed. Let’s be honest, this dish needs some sort of vegetable counterpart.

Happy “Last Day of Presidential Sanity”. I keep waiting for someone to come out and tell us that we’ve been Punk’d and it’s all been one big joke since November. Obviously I’m still nervous about letting Trump, with a Republican Congress, run this country.

20 Responses to What A Crock