Okay, there was a lot more than a wee little sunshine yesterday, but given my hash name I am taking poetic license. Yesterday I escaped the confines of the ITP Estate and took my mountain bike out for a near-eighteen-mile ride using my mountain bike which lasted about ninety minutes. I cycled up around Kirkwood, just shy of Decatur, through Emory and through Sage Hill Shopping Center, down through Morningside, over to Piedmont Park, down the Beltline to its current end, along Edgewood to Boulevard, to Grant Park, and wound up back in East Atlanta. Whew! And if the Wahoo Fitness app is correct at one point I hit a top speed of 41 mph. Hot damn!

Last night I made the Slow Cooker Cheesy Buffalo Chicken Pasta recipe. Here is how it turned out: 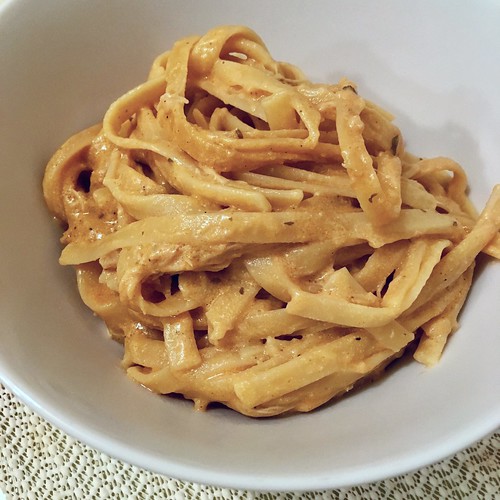 It was tasty and probably the unhealthiest thing I’ve eaten in awhile. But hey, I earned it. Would I make it again? Perhaps, the quality of the three portions of leftovers will determine this.

Busy Night Ahead
In addition to getting my now-daily exercise, doing some German homework, and writing some code, I will be headed to Ansley Mall to get my hair cut late this afternoon. Following my monthly self-improvement project I will be driving over to the west side for dinner (unsure where currently) followed by an evening of music put on by Sofar Sounds (Atlanta).

You may remember my attendance of a Sofar Sounds show a handful of months ago, when it was held in that new-ish mixed-use development project at the corner of Piedmont and Chesire Bridge. As was the case last time, I applied to get into the show, received confirmation of my attendance and thusly donated $10 to support the acts on Tuesday, and was emailed the address of tonight’s concert yesterday. I have no idea what musical acts will be performing, and I’m okay with that. Find out more tomorrow!

Have a great day folks.