DÃ©jÃ  Vu All Over Again

Don’t Ask, Don’t Tell
When I left the interview on Friday I knew I messed up some things and didn’t pull off the interview of my life as I had hoped, but I thought all was going to be okay. A weekend spent with my thoughts has filled me with self-doubt and I now have no idea. This feels so familiar…

The ball is in their court. I have no definitive update so please don’t ask.

I will say that if I managed to screw this one up it will be a monumental blow to my already-fragile sense of confidence; I’m not sure what I will do if this is occurs.

Six Months Ago?
It had been nearly six months to the day since I last saw some of the people with whom I ate dinner and consumed alcoholic beverages on Friday night at Chuy’s Tex-Mex in Dunwoody which stands across the street from our former office space. Honestly, it was really great and felt like a family reunion to me. I was happy to hear how many folks have landed jobs, much like I hope to be able to say soon.

More Like “Soup” Vide
Yesterday afternoon I put a bag of spice-rubbed pork into a sous vide water bath and let it cook for nearly five hours. Upon pulling the bag out of the 150Â°F water I saw much more liquid in the bag than I could account for through fat rendering. DANGEN! All I could figure is that there must have been a pinhole in my bag and water seeped in? Not sure. Regardless the pork was cooked, a bit too much actually, and I ate this for dinner: 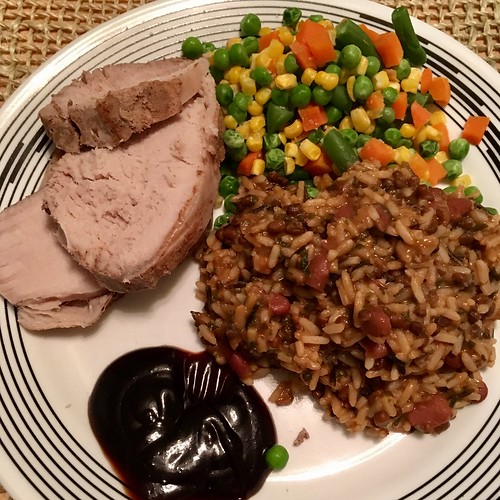 Obviously it is some sliced pork, with it I have some microwaved frozen vegetables, “rice and beans” (box of Rice-a-Roni and some Madras lentils added to it), and a dollop of Hoisin sauce (“Chinese BBQ sauce”).

A “Multiverse” Has More Verses Than Which I Care To Deal
Saturday afternoon didn’t go as planned either, so instead of pressuring myself to hang out with a bunch of strangers at Torched Hop Brewing, I stayed home; it’s probably for the best since I wouldn’t have had the courage to talk to anyone and probably didn’t need to drink much before going out to Horizon Theatre later in the evening.

My string of good luck with Horizon Theatre plays has seem to have run out. Back in December I saw the worst performance of “Santaland Diaries” thanks to the handcuffs place on the actors by the people who own the rights to the play.

On Saturday night saw “Constellations” which opened on Friday. Let me start off by saying that my dismay for this play has nothing to do with the two actors who performed for eighty minutes; they did the best with what they had. The premise behind “Constellations” is that it takes place in a multiverse, where all possible outcomes of life happening at the same time, so at numerous times in the play a noise would sound and the actors would replay a scene using different circumstances. For me it was essentially rehearsed improv. Perhaps I’m too much of a simpleton to appreciate the unique structure a play set in a multiverse provides; after all I’m no Stephen Hawking, I’m just some schmuck who is eating home alone while waiting with bated breath to see if he can work again.

Why yes, I am beating myself up about everything.

I Think I’ve Been Here Before
I did manage to keep my string of exercise days going, putting in eighty minutes of my own on the trainer on Friday, Saturday, and Sunday. For these three rides I started watching The Amazing Race Season 9!

“Wait, didn’t you just finish Season 6?” you ask? How very astute of you! Yes, that’s correct.

I started Season 9 since I knew that I watched Season 7 when it first aired (this was the first season of TAR that I ever watched) in the spring of 2005 (!), and that Season 8 was “Family Edition” which put me off TAR. I thought that I had skipped Season 9, but their is a strange sense of familiarity with the teams who participated during this season — namely BJ & Tyler (the hippies from San Francisco), and Dan & Danielle (the twenty-two year olds in pink from Staten Island who hooked up with the two volleyball playing dudes from Florida whose names I cannot recall as I write this). I’ll keep watching. One of the greatest things about my inability to remember details about a lot of the things I’ve watched is that it allows me to re-watch them.

Look Who’s Joining Urban Explorers Of Atlanta
ME! (you probably figured that out)

I’ve already proven that one can win a bit of pocket change by playing Bar Bingo. This week I also scored $60 off the cost of an annual membership to Urban Explorers Of Atlanta. How did I do this? By being the first to recognize that a photo they posted on their Twitter stream was taken inside the Euclid Avenue Yacht Club.

Hope your weekend was spectacular.

25 Responses to DÃ©jÃ  Vu All Over Again