Thankfully I don’t engage in taking the entire month of January off from drinking alcohol, and I can now hang out with those who do without fear of enticing them to join me in drinking. 😉

I’m Dead, Wait I’m Not
My legs are loving riding my trainer every day; in a rare moment of conceit I will say that my legs are looking amazing. My nether regions have a completely different attitude toward riding and hurt greatly, even though I wear padded shorts when I ride. The discomfort of mounting a bike saddle for three weeks is mounting daily. With the exception of a ride on my mountain bike during today’s repeat of 70Â°F weather, my painful parts will win out in the short term and will cause me to stay off a bike saddle for awhile. A trip to Raleigh without my bicycle will also help in recovery.

Yesterday I popped down into the basement for my eighty minutes of self-inflicted torture, and according to the Wahoo Fitness iOS app I died. 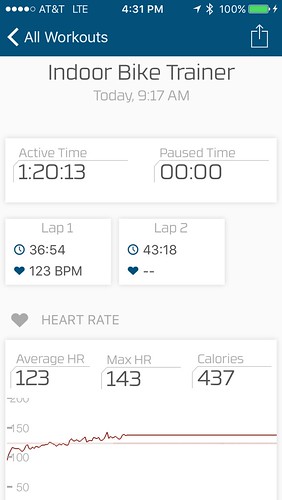 Nearly 37 minutes into my workout the app stopped recording the data being sent out by my Wahoo Fitness Tickr heart rate sensor, or perhaps the Tickr heart rate monitor stopped sending out data. You can see from the screenshot that I was undeterred by my death and continued on to complete my eighty minutes.

According to Amazon Prime I have three episodes of Season 9 of The Amazing Race remaining. In a rare change of policy I actually went online to see who won this season (I couldn’t remember from eleven years ago) because I was going to give up watching this season if one of the remaining teams with whom I have issues [Team “MoJo”] won. Spoiler Alert: Team MoJo did not win Season 9.

I’m Coo Coo For Hankook
If the tiny space once occupied by Good Eats (an association which is forever stuck in my mind because of the show formerly on Food Network), and is now occupied by Hankook Taqueria had an outdoor patio it would have been a perfect lunch yesterday.

I met up with ITP-Reader(s) Barb and Allan for a lovely, reasonably-priced meal. I ordered two tacos — one buffalo chicken (the day’s special), one beef “bulgogi” — a boatload of french fries, and a coke.

After lunch I had a handful of hours to kill before last night’s German class. I walked around the Target near Atlantic Station for awhile. I went to the library on 16th for about ten minutes, leaving after having to hold my nose while using the restroom alongside a rank smelling man inside one of the stalls, and then hearing multiple people cough and sneeze while seated in a fairly confined space.

“It’s beautiful outside, get the hell outta here!” I thought. So I did.

I drove over to and sat in a pocket park in Ansley Park. It was warm outside, but a bit too windy to do the homework that I needed to complete. 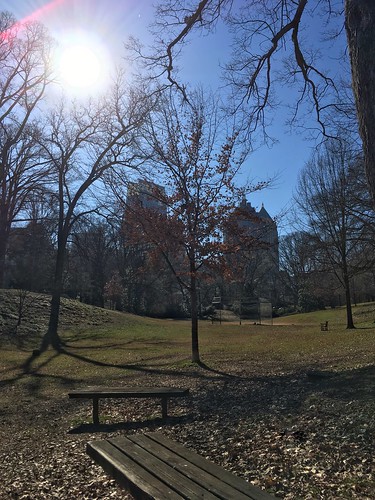 After spending a half an hour in the park I packed up and drove over to Hob Nob where I had one beer and did homework.

In case you haven’t figured it out yet, I am trying to continue to take advantage of my time off while it lasts.

Top Chef And Take Out
While I have been doing a really good job of eating home-cooked meals recently, tonight I will be consuming take out food while watching Top Chef with Betsy. We have two episodes to watch, which means that we’ll be consuming a good bit of wine during the first day of “Wetbruary” (not a thing).

Another Hurdle
I have another interview tomorrow and will have to provide references prior to being offered a job. By the end of this process I will be better vetted than current Supreme Court Justice appointees. I can do this.

8 Responses to “Dryuary” Is Over