It is Friday, right? When I return to work in ten days, I officially start April 10, I will have to relearn how to remember what day it is.

Well That’s Going To Cramp Our Style
Atlanta: The City Too Self-Important To Take Mass Transit

We, and I include myself, love our cars. Cars are the best (and worst) way to get around Atlanta. And as long as we keep building roads we never have to rely on public transit, in fact, we’ll never have to succumb to building light rail and can continue to slash bus routes left and right. What could possibly go wrong?

It’s going to be interesting to see how this metropolis reacts to the collapse of a portion of I-85 due to a massive fire yesterday. Thankfully no one was injured.

I’m Just Wild About Harry’s
You don’t get to have a face a remarkably handsome as mine without good shaving products. Truth!

For the past few years I have bought into using the razors and shave creams from Harry’s.

Every other month I receive my subscription order of razor blades, shave cream, and now facial scrub. But this month my order was wrong! Instead of facial scrub I was sent after-shave balm. Bummer! Or not. Harry’s has great customer service, and when I reached out to them on Twitter they responded nearly immediately. When I described the error they informed me that they’d send the facial scrub at no cost to me, and that I could keep the after-shave balm as well. Nice.

Wasn’t I surprised the other day when walking in Target to see an end-cap with Harry’s products on it. Bonus! Now in a pinch I can restock without having to try and finagle my subscription.

I don’t say this often, but I am pleased.

If Only
Many days late, many Euros short. 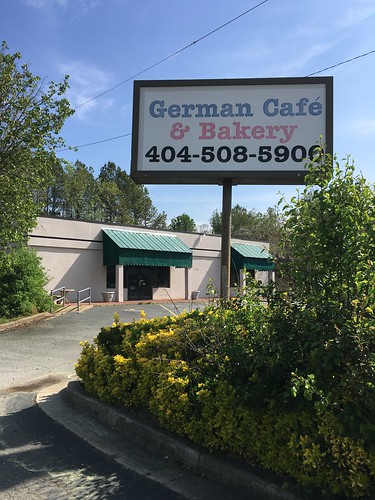 The other day when I dropped off my stuff at that massive new Goodwill on Lawrenceville Highway near North Druid Hills I noticed this now-closed German CafÃ© and Bakery. You know me and my love of all things Deutsch. Sad!

Forced Day Off
I really wanted to work out at LA Fitness this morning. Really, I did. No fooling! (see calendar) I even loaded up on two doughnuts for breakfast. Alas, I must take a day off.

My change in exercise plan is two-fold.

First and most importantly, I somehow managed to tweak my right knee yesterday; it hurt a lot last night. I don’t think that whatever I did is serious, however it is still bothering me a little this morning and I see no reason to push my luck.

Second, I have a time pressure today. Today I am joining Urban Explorers of Atlanta for lunch downtown, followed my a tour of the facility that houses the Zero Mile Marker for Atlanta. Apparently getting to see this landmark is a big deal. I’ll let you know more about it on Monday.

After the tour I will be having a few drinks up in Atlantic Station with some old coworkers.

Since I don’t want to pay for all-day parking downtown I had intend to take MARTA, and now I am relying on them to be able to handle whatever rider increase has occurred due to yesterday’s interstate collapse.

Speaking of MARTA, I am more than a bit ticked at them for once again changing its Breeze Card. Now I am going to have to purchase a new Breeze Card and figure out if/how to transfer whatever balance I have on my old Breeze Card to it. Apparently today is the last day to add rides to a blue Breeze Card and all balances on blue Breeze Cards must be used by July 9th — “use it or lose it” according to the website. Sometimes it feels to me as if MARTA continually seeks ways to put itself out of business.