Planning My Final Week Of Hiatus

It’s official, I start working again next Monday. My bank account will be the happiest for this return.

I am scrambling to complete tasks before ten hours of my day are allotted to work-related activities. By this time next week I am hoping to be proud of the things I’ve accomplished over the past nine months, as well as having a better feeling about the ITP Estate and my relationship with it.

Zero Mile Post
The I-85 collapse finally affected me in the form of no parking at MARTA when I went to take the train downtown on Friday. CUE TINY VIOLIN!

On a glorious day to be outside I met up with a large group of folks at Alma Cocina for lunch before we all hoofed to the Zero Mile Post. The food at Alma Cocina was really good, and given their downtown location was fairly priced. I ordered the chips and salsa sampler ($8) to share with my compadres and the carnitas taquitos ($8) for my lunch.

As if seeing the origin of Atlanta, nee Marthasville, nee Terminus, was not exciting enough, we were informed that Atlanta Beltline architect Ryan Gravel would be joining us at the marker as he had never had the opportunity to see it. 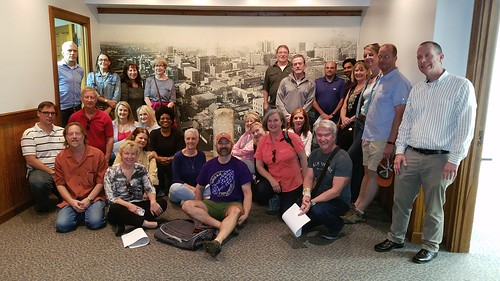 (that’s Gravel in the doorway on the left)

After seeing the Zero Mile Post about half of the crowd walked over to Park Bar for a beverage.

It was nearly 4:00pm by the time I finished my beer, time for me to walk to MARTA and head north to Arts Center where I’d meet up with Hank, who works near 17th/Spring now, to walk over to Atlantic Stations for happy hour. Originally there were to be eight of us at happy hour, two bailed due to the traffic caused by the I-85 collapse, one was sick and couldn’t make it, and one mysteriously never showed up (which is not unusual for her). Four of us went to Yard House. Four of us sat for ten minutes with no server. I asked a server clearing the table behind us to please get our server. Five minutes later four of us left Yard House and enjoyed happy hour at Meehan’s.

Tech Me Out To The Ball Game
Saturday didn’t start out all that great, not because I had a hangover, but because as I went downstairs to ride my trainer my right knee started hurting again. I bailed on my workout.

Once a year I see a Georgia Tech baseball game with my friend Hank, and Saturday was the 2017 edition of this tradition.

Hank and I met up at The Barrelhouse for a few pre-game beers and lunch. I drank Monday Night Slap Fight and ate a delicious hamburger. I’m sure the cooks have changed, but I was pleased to see that once again when I ordered my burger “medium” that it came out with a pink center. Bravo, Barrelhouse. Bravo.

After libations Hank and I meandered down the hill to the baseball field, where we watched a decent game. Hank is a Clemson alum, so the game’s outcome was not how he hoped (it was the only game in the three-game stint that Tech won), but we had fun. I joined Hank and his family for dinner at Raku Ramen. I have seen a lot of ramen while binge-watching The Mind Of A Chef and Chef’s Table, so I was excited to eat some. Not seeing much in the way of ramen that thrilled me I ordered a bowl of Yaki Udon with beef. My meal came out nearly five minutes later than the rest of the table’s food and when I saw that the noodles were certainly not udon noodles, I may not be Japanese but I know the difference between thick udon noodles and the skinny ramen noodles in my bowl, I decided to shrug my shoulders and eat what was presented to me. I probably won’t return to Raku Ramen.

Happily Surprised
On Saturday morning I placed three pieces of furniture — a bookcase sized for CDs, a wooden chair that used to be my desk chair, and the dresser I mentioned last week — on the street in hopes that someone would claim them before the rain hits today. By my return on Saturday night the bookcase had been claimed, but the chair and dresser remained. While out doing yard work (!) yesterday, don’t get too excited I just cleared the carport area of leaves an pollen, someone drove up and took possession of the rest. These pieces of furniture served me well for many years and I’m pleased that these pieces have new owners.

I spent the rest of my Sunday cleaning, organizing, binge-listening to “S-Town” (not as interesting to me as advertised), and watching the first episode of this season’s The Amazing Race.

My Monday Agenda
On my agenda for today is some grocery shopping, and a trip to the library to return a book. Later today I will also be doing a KonMarie on my books, gathering up the ones that no longer spark joy (read “I realize that I will never read” in this case) and boxing them up for a trip to Goodwill some time this week.

Hope that your weekend was grand, and that you make it a great Monday.

17 Responses to Planning My Final Week Of Hiatus