In the past twelve hours I have experienced life’s highs and lows. I was pleased as punch this morning, until I did something stupid.

I am running late this morning, with way to much to do by dayâ€™s end, and in my haste I fucked up. 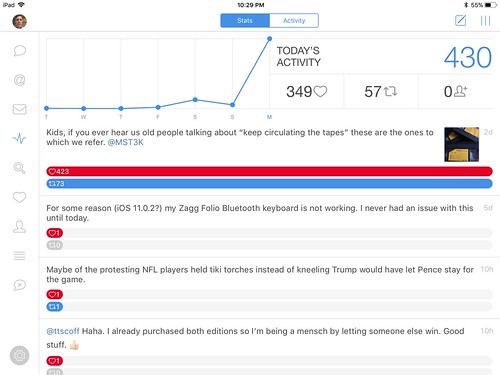 Apparently my tweet touched a positive nerve because I have never had a tweet retweeted and favored as much. For about an hour notifications of approval the likes I have never heard before came streaming to my iPhone in the form of notifications. I can’t imagine having real popularity.

And Then There Is This Morning
I am already furious with myself this morning because at the laundromat I did something incredibly stupid. It was not until I started the washer, which I have since found out cannot be stopped once it has started (talk about design failure, or lack of empathy from the person who told me so), that I included my cardboard box of fabric softener in the load of whites that I am currently washing. I know that the box and all of its contents will be ruined, I’m curious to find out how many pieces of clothing they take with it. I also canâ€™t wait to have to fish out small pieces of cardboard from the load. Thereâ€™s a part of me that would love to just throw out everything in that load and say â€œFuck it!â€

It’s at this point I should remind myself that fame is fleeting, and the material possessions should not be that important To me.

Now I need to figure out a way to cool down to work on the German homework that I was unable to convince myself to do last night.

A better Tuesday to you,
Paulie [eatl/ga]

21 Responses to Yin And Yang