Monday again? Bah. Humbug! Itâ€™s not even Halloween and I am pulling out the Christmas sayings!

Not Much Celebrating
As I mentioned on Friday, yesterday was the anniversary of this blog. Go me!

On Friday evening I went to Theatrical Outfit for their performance of “Boy” which is based on a true story of a boy’s circumcision gone wrong, and the failed attempt to raise him as a girl. Yeah, not exactly light theater. Regardless the play was extremely well acted, and except for the young man who left and never returned the half-filled theater saw a good play.

Saturday was mostly spent milling about the ITP Estate doing chores, and reading. Yes, I said reading. The morning started out on a sour note as I discovered that Lowe’s doesn’t carry any toilet parts that would fit any plumbing made prior to say 1975. My leaking toilet was made in December 1957. In a huff I left the mega-hardware store and headed to Ace Hardware on Scott Blvd. I was too early, so a stop a Starbucks was in order. Upon my return to Ace I was helped by a nice Ace hardware man (cue Suzanne Somers singing the 1980s jingle prior to political correctness!) and I was on my way home. My goal was to improve my attitude with breakfast only to find my initial choice for my meal didn’t open until 9am on Saturday. I don’t get it! I turned the M6 around and ate a lovely old-school breakfast at The Majestic Diner instead.

I. Fixed. The. Toilet! Sure, unscrewing one rubber ball stopper and replacing it with another, once you’ve realized that the modern-day brass rod is too short for your ancient plumbing isn’t hard, but goddammit I think that I fixed my toilet from leaking, for now.

I treated myself to a day of reading. Yes, reading! I am reading, and trying to complete by a week from Friday, “Beartown” a novel written by Frederik Backman, the same man who wrote “A Man Called ‘Ove'”. “Beartown” is about a small town in Sweden who is pinning its future on the outcome of a hockey game, well, that’s what it has been about during the first 40% of the book that I’ve read. The reason I want to finish by Friday the 20th is so that I can discuss the book with Lisa, who suggested that I read it, at LEAF. 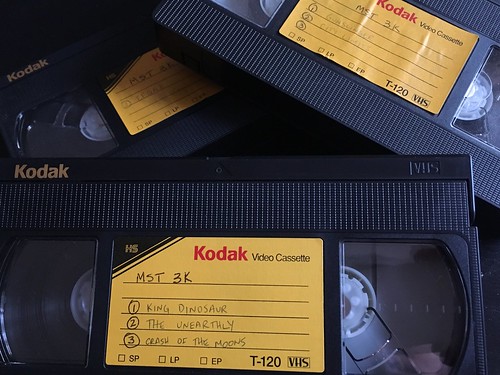 This weekend I parted with most of my VHS tape collection. I haven’t owned a VCR or VHS player in over a decade. Among my collection were these, recordings from Comedy Central when they used to air Mystery Science Theater 3000 in the 1990s. I discovered MST3K when I moved into my first (and only) coporate apartment; I was in Huntsville Alabama and somehow stumbled upon the show while flipping through the cable channels.

Prior to, and perhaps during its early days on Comedy Central, MST3K built a following by people distributing VHS tapes of the program to friends. At the end of the credits were the words “Keep circulating the tapes”.

No, there was no such thing as streaming video then.

Yes, that’s the same Kodak that used to make camera film, which was also a thriving business when these recordings were made.

They Say It’s Your Blog’s Birthday!
Yesterday just flew by. It must have been all of the congratulatory messages I fielded from the press about my long-running blog, or “binary log” as I like to wrongly call it. Or maybe it was due to the number of times I checked to see my fantasy football team go down in defeat. It was not a good weekend for my sports rooting, though the Jets did manage to outscore the Browns.

Last night I had dinner at Ration+Dram, I ate the Spicy Chicken sandwich, it was not spicy but it was good nonetheless, before going over to Pinch ‘n’ Ouch Theatre to see the one-man performance of “Glengarry Glen Ross”.

I was the first patron to arrive at the theatre. Surprise! No, what was the real surprise was that only seven other people came in after me.

The actor, Andy Fleming, who played all seven parts (of course he did, you said it was a “one-man” show!), did an admirable job. Unfortunately there were parts that he skipped and performed too early, obviously shaking him a few times during the play’s second act, but there is not way that I could learn ninety minutes of dialog. I shook his hand upon leaving and congratulated him for his performance.

I was home early enough to listen to some podcasts and attempt to write some code, because that’s how this old man partys these days!

Hope your weekend was equally enthralling.