Doing this “old school” today by entering text via a keyboard attached to the computer known as my laptop. Why? Because my iPad is charging and I don’t want to interrupt that.

Yesterday was an okay day for me. In addition to 9-5 worky-work, and seeing Bonnie, who took away all of my CHaRM recycling, I did some yard work.

The problem with recycling is the same problem one has with laundry and dirty dishes — the minute you think “Yay, all gone” you generate a new collection. And thus, I now have plastic bags, glass, and perhaps some scrap metal that the City will not take.

My yard work yesterday was “interesting”. Sometimes I believe that I suffer from a mild case of ADHD since I start many tasks but rarely finish them before moving on to another task.

Because “growing season” will be on us before we know it, I needed to get outside to mark my planting area and start vigorously clearing the ground so that it can be leveled, as in made level for the garden beds and paths. Once leveled I can then place the raised beds and lay out the paths around them. The thought yesterday was “Mark a 13-foot square (I now have a new layout from when I was marking the rectangle which unearthed the brick path — another half-done job) and then garden fork the fuck out of it to make it easier to level soon. Yesterday my geometry failed me, on what should have been a simple task. I hammered in two pieces of rebar thirteen feet apart. Then per my calculations for the square’s hypotenuse:
13^2 + 13^2 = 338
âˆš338 = 18.38
which works out to be approximately 18′ 5″

Simple enough, right? Not for me. Every time I laid out what I thought was the correct hypotenuse length the box was wonky.

After a few attempts I said “FUCK IT!” (internally) and proceeded to reduce my anger by garden forking the fuck out of the ground that lays within an area I know will be garden. Of course I hit some rocks, and roots, many, many roots. But the garden fork is a devious tool and works well to expose the roots and loosen the soil so that roots can be yanked. While doing this task one of the neighborhood birds came back around and watched me work while occasionally snacking on a worm or grub that I had unearthed for it. This bird, a rather brazen one, comes quite close to me to dine. Hell, for all the hard work I am doing to feed it, it might as well be my pet. ðŸ˜‚

The network of roots in my back yard is amazing; as I pull one sizable root I encounter others crisscrossing it to make extraction very difficult. As darkness began to fall I had to admit defeat, clean up my tools and boots, and leave the ground and roots that I could not extract for another day (today?). In all I think I got about 40% of my plot forked, but even in that area I will have to return to finish forking and begin leveling.

I discovered that this is even more exercise that ivy pulling! Though you’d never know if you only referenced my AppleWatch which only credited me with twelve minutes of “exercise” for my over-two-hours of yard work. Maybe by next week’s weigh-in I’ll be down to 185 pounds! ðŸ¤žðŸ¼

Oooh, because I am on a laptop it’s easier to include a photo! Here is a photo I took yesterday morning: 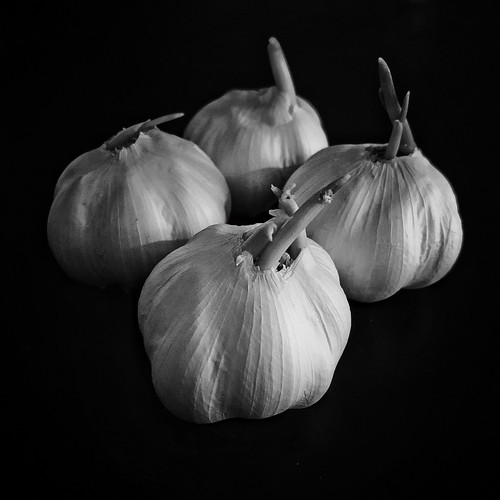 I bought this garlic to eat, but it has a different idea about its future. So, I will be planted this week instead.

Today? Perhaps more of the same, adding an hour of TV watching “with” Betsy; tonight we move on to “Top Chef New Orleans” since the All Stars 2 season from earlier this year has yet to make it to Hulu.

Hope you all are doing well and staying healthy.