I went to the Southern Comfort hash on Friday night. Well, I went to the end of the Southern Comfort hash on Friday night for the Christmas tree burning. Beforehand Bonnie and I decided to go out for a walk to get exercise. We walked three miles down the south Beltline, which meant a six mile walk was in order. Well, we then decided to walk to My Friends Bottle Shop, adding another two miles to our journey.

Saturday’s hash went well, we had over fifty hounds. Well, more like fourteen. Most people seemed to like the (5.5 mile) trail even though they had some difficulty solving our checks and some people were hoping for harder shiggy than we went through. I thought our trail had a good amount of runnable shiggy and interesting scenery to be a good Atlanta trail. The On After was at Arches Brewing, but I was not in the mood to be out any longer so I headed home instead.

And then the snow arrived on Sunday! 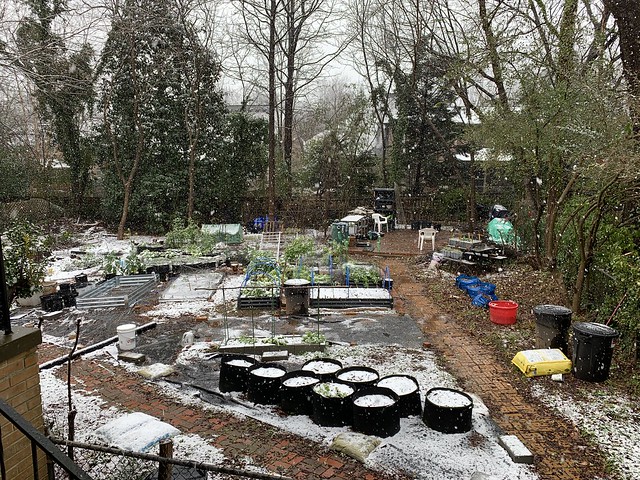 WLF experienced its first snow! (Yes Bill/Ronnie, this is enough to be qualified as “snow” in Atlanta) The snow and cold will put the final nail in the coffin for some of WLF’s crops. I’ll let whatever is going to die die, and deal with some cleanup next week.

The high winds caused the power at the ITP Estate to go off/on about ten times yesterday morning. When the winds died down, the snow started falling.

After being outside on Saturday I was worn out and couldn’t convince myself that going out in 35°F, wet weather by attending Black Sheep was a good idea. From what I’ve seen on Instagram it appeared that the pack who did go out (perhaps even more hounds than we pulled in on Saturday) had a blast. Instead of going out I allowed myself to be a lazy slob and do nothing. Bonnie walked over with frozen chili and we dined on it while sharing some beers and watching tv.

Today, well, it’s MLK Day and I have the day off! ???? (fuck, emojis are really gone for awhile; you are probably pleased by this…) Last year I joined hashers in picking up trash. This year, I am not sure. The weather here is supposed to remain cold, which will mean that the snow may or may not melt. [update at 7:30am — I just peered through the window as day is starting to break and see that most of the snow has already melted!] Because of the cold I won’t be hashing tonight, even though the start is at 5pm. I will try to jump onto the trainer for awhile in order to get some exercise.

Hope all is going well and that you are remaining healthy.