A look at the calendar tells me that today is the day last year that I went out for a quick errand to pick up propane for the bbq and gas for the lawn mower. Today is my one-year “anniversary” of getting carjacked upon my return home from running this errand. For those new to my world, the whole story can be read as Part Two of my three-part 2004 wrap up called The Good, The Bad, and The Ugly.

Today is the day that the Red Rocket lost her virginity and became the Jackmobile. I wish I could say that I had a really cool update (I don’t), or that this experience taught me something that made me a better person (I didn’t). Truth be told it probably made me more of an asshole than I ever was before.

But enough of the bad shit. Today is a day to celebrate!

Rain Man
Let me guess, it’s probably going to rain today. At some point this has to stop. Everywhere I go it seems to rain. It even rained in Las Vegas, which is in a desert! I am starting to feel like one of the Gruesomes. 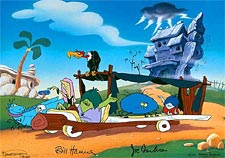 C’mon say it with me… “Hello Mr. Fleeentstone.”

Yesterday’s rain was a double whammy, spoiling both a morning bike ride and the ending of a very fun hash. Hrmph!

Monday Morning Poker Tip
Don’t go “all in” when holding K-8 offsuit, even when the flop comes up K-6-K. Why not? Because the guy to your right might be holding K-J, and your ass will be booted from the tourney. Take my word for it, it can happen.

That tip is free of charge. Consider it my gift to you, in addition to the rain.

Random (Apple) Thoughts (Apple) About (Apple) Saturday
Decked out in my finest Old Navy American Flag t-shirt from 2003 I headed to Lenox Mall on Saturday. That’s where we Beautiful People roll on the weekend, you know.

Eventhough a bit of a belly pooch is all the rage among us Beauts, I felt it necessary to get some exercise after eating All I Can Eat Chinese Buffet for lunch. I frequent the one ironically located next door to Jenny Craig on Sidney Marcus (btw- you can read how that skinny little bitch Robyn lost 29 pounds thanks to Jenny by following this link).

Because I am now an official Apple Switcher I headed to the rarified air of the Apple store where only the select few of us who are both handsomely gifted and weathly enough to buy Apple products mingle. Has somebody been subliminally dropping Apple’s name everywhere? The Apple store was frantic as if they were giving things away (not like Apple at all)! And not to sound too catty, the people in there were definitely not the same crowd I see sipping on Mocha Affogatos at Starbucks. I’m just saying.