But I have a few short moments…
Today’s Daily Challenge
Note one new positive detail about someone or something you encounter each day.

Many things happen around us every day that we never stop to appreciate or think about. But taking time for gratitude can improve both physical and emotional health. Bonus: Getting into this habit can increase your mindfulness of even more new things to notice and appreciate

Huh, kinda hard given the story I’m about to relate.

The Gene Pool Needs More Chlorine
I went to play racquetball at the LA Fitness in Dunwoody last night. Because of my travels my gym bag was in shambles, not containing some of my necessities, including my combination lock for the gym locker room. Though I am usually pretty careful not to bring anything of value other than keys into the gym I just didn’t feel comfortable leaving my stuff in an unlocked locker. My boss, who had his lock with him offered to let me put my stuff in his locker, but I declined.

Upon returning to the locker room after our hour or so of playing he was confused not to find the lock on his locker, and then he discovered that his wallet was gone. Over the next hour as he was attempting to cancel credit cards and such he received notifications of possible fraudulent activities in the area — to the tune of over $5000. $5000 spent (apparently at Target and Best Buy) in about an hour!

Luckily the way the credit card systems work he won’t be liable for these charges (I guess in a way we all are), and his biggest hassles are the loss of some personal items, a small amount of cash, and his driver’s license.

I was considering coming back into the office to work but instead bought him a couple of beers at Firebird. 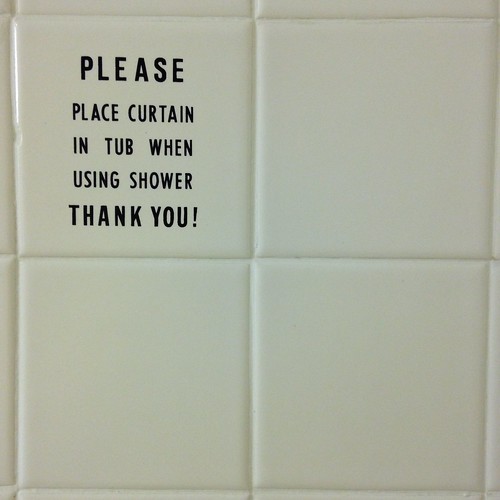 From the shower in my room at the Crowne Plaza in Austin, Texas.

On A More Positive Note
Every have that thought “Gee, I haven’t heard from [insert name here] in a while.” only to hear from him/or her that day or the next? This happened to me last week with a podcaster named Kami Knake who publishes the podcast Bands Under The Radar.

As I was preparing for my Austin trip I was looking over the podcasts to which I am subscribed and noticed that it had been about a year since the last time Knake put our a Bands Under The Radar podcast. I was not surprised because over the years many of the podcasts to which I subscribe experience “podfade” and eventually die out (who knows, this blog may do the same one day…). And then while in Austin two new Bands Under The Radar podcasts were released. Sheesh! Well, at least it’s good to have it back, even if it goes away again soon.

Stats & Goals
Daily
Current Mood – angry at Society
Current Music – silence at the moment
Website Of The Day – Admit it, you’ve always wanted to sit around and watch other people play video games. Your wish is granted at Twitch! Oh, don’t expect to see people playing that new “Family Guy” game however, FOX is being real asshats about that (just Google if you are interested).
Mode Of Transportation To Work – my car (loving this Spring Break traffic, or lack thereof)
Exercise (b)Log – racquetball, ~1 hour
Morning Weigh-In – have stopped checking