Did You Get The Number Of That Truck?

I played racquetball last night and I feel as if I’ve been hit by a truck today. I thought that this was supposed to get easier with time.

Dust and fingerprints build up on monitors and touch screens, leaving a fine layer of grime that decreases the sharpness of the screen and contributes to glare. As a result, our eyes have to work harder to see what’s on the screen. Removing dust is one way to prevent the dry and fatigued eyes, blurred vision, or headaches that come with eyestrain.

Who the fuck touches their computer or TV screens? You people are disgusting! I do need to wipe my computer screen off because it unfortunately touches the keyboard when closed.

And before you perform this take two more minutes to understand how to do it properly lest you ruin your screen by scratching it.

Those Were The Days My Friend
I’m glad that the weather turned for the better on Saturday so that the East Atlanta Beer Fest participants could have a better time. Since it’s moved to Brownwood Park I can hear it from my house, and recall my days of youth.

Around 6pm Saturday I decided that I needed to get out of the house and have some human interaction (living alone sometimes does this to me). The “village” was crowded as I was leaving my house at the same time as the Beer Fest was shutting down, so I decided to drive. While unknown at the time my destination had to be a place where I could sit, have a beer, and read my iPad. I drove through Kirkwood and noticed all of the new and newly-owned places were packed (I think there was a BBQ festival going on in Kirkwood Saturday too), then past all of the places along Howard/College, and made my way to Decatur were my destination was Twain’s. Apparently Saturday was also Decatur Spring Fest, and Twain’s was charging a $5 cover charge (for charity). Since I had no interest in the festival I declined, turned around, left Twain’s, and headed home where I made myself a pasta dinner and never went out again. 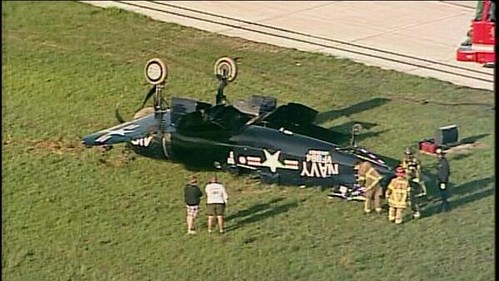 On Friday night I joined my boss and his two daughters for dinner at 57th Fighter Group. On Saturday there was an airshow and some of the participants were practicing. At one point we saw this plane fly low to the ground a few times and I joked that the pilot didn’t know how to land it. On its next pass the plane slowed to land, and then out of nowhere flipped over after doing so.

This is (obviously) not my photo, it’s one I stole from the story about the accident. The plane was beat up badly, but luckily I read that the pilot escaped almost unharmed.

Today’s Personal Project
Get some exercise. Hopefully this fog will clear, it’ll warm up a little, and I can go for a walk.

Stats & Goals
Daily
Current Mood – aching
Current Music – silence at the moment
Website Of The Day – Have some books you want to convert to digital files? Send them to $1 Scan and they’ll do it for you. Don’t send them any book you want returned however, as after scanning the book they destroy it (it’s a legal thing)
Mode Of Transportation To Work – my car
Exercise (b)Log – Sunday = racquetball, ~90 minutes
Morning Weigh-In – I didn’t prepare my bike nor did I step on the scale this weekend.

5 Responses to Did You Get The Number Of That Truck?