Tonight the Atlanta iOS Developer Meetup is a party at Ri Ra in midtown. I’m not exactly sure why we are having a party tonight but who am I to disagree. I’m looking forward to returning to Ri Ra, and establishment I’ve only been to once, back in December when the Raleigh Royalty and I joined up with ITP-Readers Bob and Laura for dinner.

Losing the fat in your favorite meats doesn’t mean they have to be any less tasty. Marinades add flavor and juiciness to meat that’s been trimmed of fat or skin. Plus, if you prefer to grill your protein, researchers have found that marinades prevent unhealthy substances from forming when the food is cooked over high temperatures.

Tofu? Man I haven’t made fried tofu in quite some time. Oh wait, they probably don’t think I should be frying it, do they.

Lavanderia Y Burrito
I made it over to my usual lavanderia last night and was pleased to see how empty it was at nearly 7pm on a Monday night. With little consternation I completed my three loads (colors, whites, workout) and decided to pick up a quick bite at Las Tortas Locas.

At Las Tortas Locas I should know better than to order anything more than either two/three tacos or a single burrito, but last night I decided to add some chips and salsa to my burrito order. The food was predictably delicious and even though I did not eat all of the tortilla chips given to me I was quite full upon my exit from the restaurant.

I Hate Avoidable Design Failures
For years I’ve been aggravated with the engineers who designed the shape of the Jackmobile’s trunk because when it rains water drips into the opened trunk getting anything placed on the sides of the trunk wet.

This morning I took out the trash can, wishing I had taken it out last night when I’d also taken out the recycling can. Had I done so the heavy rain that passed through late last night could have washed of the pollen that has been on my trash can for months. But I didn’t. I was able to wash off the pollen this morning by dumping the bucketful of rainwater that accumulated last night over it. When I came out to throw in the last bag of trash a few minutes later there was a puddle of water on the lid, which when I opened the trash can, drained directly into the trash can instead of outside of it. Another fail!

These are not hard design problems, and the use cases for water dripping off a car’s trunk or from the top of a garbage can are not unusual. I don’t understand why design failures like these make it into the real world. 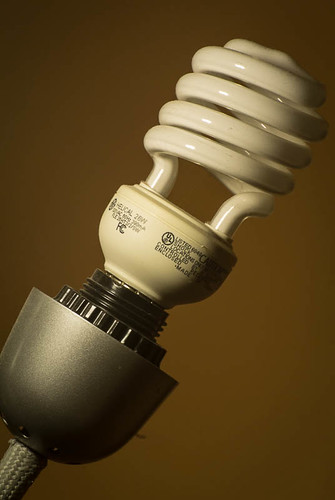 This is a compact fluorescent bulb that very few people have ever seen, because it’s in my bedroom. I’m pleased with the lens, at least for this shot, because the printing on the bulb’s base is pretty sharp.

Dogfooding My New Photography Workflow
“Dogfooding” is a recently-coined slang word used to reference a scenario in which a company uses its own product to validate the quality and capabilities of the product, also known as “eating your own dog food”.

The other day I tried to dogfood my new photography workflow:

I got as far as Step 3 because my iPad Mini was not recognizing the SD card.

Yesterday I hoofed it over to the Apple Store in Perimeter Mall and purchased yet another $30 adapter (this is really the way Apple is making so much money) for this process.

Tonight I hope to test the process again, this time with the new connector. If this process fails I’ll need to conduct two experiments:

And if it turns out that the iPad Mini is the issue then I’ll be making an appointment with the Genius bar to sort things out.

I have five weeks to nail down this workflow so that I don’t have to bring a laptop with me to Europe.

Stats & Goals
Daily
Current Mood – okay even though I didn’t get the chores done last night as I had hoped
Current Music – silence at the moment
Website Of The Day – Because I know most of you out there are not Apple nerds I won’t inundate you with Swift programming links. However, I’m linking to SwiftDevs today for my own convenience.
Mode Of Transportation To Work – my car
Exercise (b)Log – nothing
Morning Weigh-In – 216 pounds (2014-05-30)