Whoops There Was No Title

I guess I have no central theme today because I could not think of a witty title.

Today’s Daily Challenge
While on all fours, reach an arm underneath your body and then above. Repeat and switch sides.

The middle of the back, called the thoracic spine, is sometimes forgotten. When your thoracic spine isn’t strong or flexible, your lower back and shoulders make up for it and are more likely to feel stiff and sore. The rotation movement in this stretch keeps your middle back mobile.

Ri Ra Was Al Ri
Once I committed myself to paying $12 to park in midtown I knew that I was going to have an alright time last night at Ri Ra. (Had I stayed fewer than two hours parking would have been less than $12 and I could have had it validated by Ri Ra. But, I was there at least three hours.)

Thanks to the impending rain I scurried into Ri Ra earlier than desired, arriving at least a half hour prior to the meetup’s start. So I did what I do best, I bellied up to the bar and had a beer as I watched a rerun of yesterday’s CritÃ©rium du DauphinÃ© stage. Ri Ra an Irish bar, of course they show cycling on the big screen.

At the meetup’s start time I joined the group at a long table. [note for party planners: this is the worst thing you can do if you want to stimulate conversation amongst the entire group] I sat there chatting up the dudes around me (I counted three women in our group of approximately twenty-five) having two more beers and a sizable portion of spicy chicken nuggets for dinner.

Starting next month the group meetings will be moved to Atlanta Tech Village in Buckhead due to the closure of Hypepotamus’ physical space, where the group has convened for nearly two years.

ITP Flickr Pic
“Perhaps I Should Switch To Decaf” 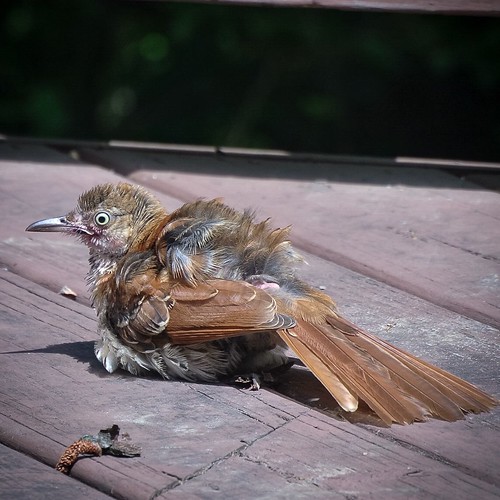 On Saturday some young birds landed on my deck to stretch out there wings and to flail about to knock of some of their baby feathers. It was quite the show.

With the $29 adaptor my dogfooding worked last night and this photo is proof-positive! I took the SD card from the camera plugged it into the new adapter, plugged the new adapter in to the iPad Mini, selected a couple of photos from the card, edited this on in Lightroom (the iOS version), and uploaded it to Flickr from the iPad Mini. The process is slightly more cumbersome than doing it on a proper computer, but I can see pass this in order to not have to bring my laptop to Europe.

Am I Really Hatching A Plan?
Yesterday I started hatching a plan that would require me to burn two vacation days in order to attend CocoaConf in Columbus, Ohio! That’s right I said Columbus, Ohio.

CocoaConf is the three-day iOS nerd gathering that I attended last December in Atlanta, drove to Austin, Texas for back in April, and have committed to attending again in Atlanta this December. It’s not that I want to visit Columbus that badly, but this conference will be one of the first to have a full-day workshop teaching Apple’s newly-announce programming language “Swift”.

In my dream world I’d get the company to pay for the $650 conference fee, $300 airfare, $400 hotel bill, and $50/each way airport<->hotel shuttle costs. But sometimes it’s nearly impossible to get the company to sponsor this sort of thing (read “the company is super-cheap”) and I played the “I’ve never been to a conference in my sixteen years as an employee” card last year, for which they only agreed to pay half of the conference fee.

So I’m thinking about footing the bill, and taking the two weekdays on which it is held as vacation days. What a mensch! In order to minimize my expense I’d probably burn 25k SkyMiles (from the large pool that didn’t get used for my Brussels airfare) and save $300 that way. What’s really sticking to my craw is the $100 it will cost me to travel from and to the airport because the hotel in which the conference is being held is supposedly twenty-three miles from the airport and the hotel provides a complementary shuttle for a radius up to five miles. I considered driving (because I like to do so) but according to Google Columbus, Ohio is about 580 miles away and if I rent a car that’ll wind up costing me at least $200 and will increase my total cost because I’ll be eliminating the only “free” part of this package.

I should probably hold onto the $1100 it’ll cost me (assuming I use SkyMiles) because I know I’m going to be feeling financially punched in the gut when I return home from the nearly two weeks I’ll be spending in Europe.

Today’s Personal Project
Get some exercise.

Stats & Goals
Daily
Current Mood – pretty good
Current Music – silence at the moment
Website Of The Day – I was told last night that the space at Atlanta Tech Village is not free, but we are going to be sponsored by BluMenlo for awhile. I hope this doesn’t come off like a commercial for BluMenlo but I am appreciative that they are ponying up some money for us to meet.
Mode Of Transportation To Work – my car
Exercise (b)Log – nothing
Morning Weigh-In – 216 pounds (2014-05-30)

8 Responses to Whoops There Was No Title