I Zigged When I Should Have Zagged

Not my most stellar day ever.

The immunizations you received as a child don’t protect you as an adult. Vaccines prevent serious diseases and also stop the spread of disease through your family and others around you. Reading up on the recommendations can help you find out about the vaccines you need based on your age, lifestyle, location, or other factors.

I was vaccinated against becoming an adult a long time ago.

Had I Known I Wouldn’t Be Able To Leave
I assumed I’d take the boss to the hospital, go up to the doctor’s office with him so that I could be briefed, and then be set free. I was planning to use the time twixt drop off and pick up to run some errands such as getting the Jackmobile’s emissions check, and going to the Apple Store to retrieve my repaired iPhone 5. But nooooooooo. I sat there fiddling with my iPhone until it was time to take the boss home.

Patient Cleared, Doctor Should Have Healed Himself
After swinging by the office to get my stuff I drove the boss back to his house. I hung out with him for awhile to make sure that he was okay before I took off.

I guess it was a mistake to watch an hour’s worth of “barbecue reality TV” (yes, they exist) on a fairly empty stomach because of doing the smart thing by doing some exercise I went to DBA Barbecue for dinner. Go damn was it good! 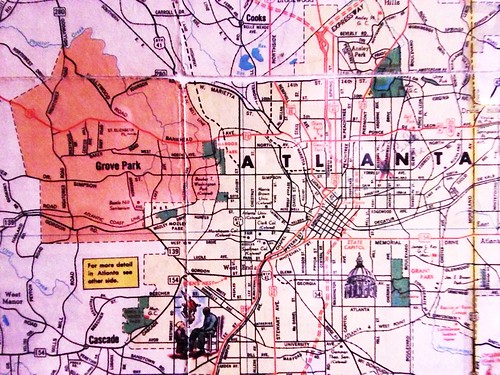 When I was in the Atlanta Room of Smith’s Olde Bar the other night I saw this 1951 map of Atlanta hanging on their wall. I was struck by this fairly large part of town west of downtown called “Grove Park”. Though fairly prominent in 1951 I confess to having never heard of it in the nearly twenty years that I have lived in Atlanta.

Out Like A Light Even With The Lights On
In yesterday’s blog post I failed to whine about the fact that I slept poorly on Tuesday night, waking every hour or so. I guess that lack of quality sleep combined with a bellyful of barbecue conspired to knock me out super early last night.

I have no recollection of the time I originally fell asleep, with the lights on mind you, but I know that I awoke again at 10:30pm. At that time I took my second dose of medication (that seemingly is doing nothing for me) before falling asleep nearly immediately again.

Of course every early night-night I have is met with an early wakeup call. This morning I awoke shortly before 5am and have been on the go ever since.

Today’s Personal Project
Get some exercise. The plan is to play racquetball with my boss who believes that he’ll be ready to play by tonight. I should have a Plan B in place just in case.

Stats & Goals
Daily
Current Mood – meh, not to thrilled with myself today
Current Music – listening to this week’s Coverville podcast
Website Of The Day – I hear this FIFA World Cup thing is a big deal.
Mode Of Transportation To Work – my car
Exercise (b)Log – nothing
Morning Weigh-In – 216 pounds (2014-05-30)

3 Responses to I Zigged When I Should Have Zagged