Possessed By The Devil

Today’s Daily Challenge
Take two minutes to examine the inside of your mouth.

When was the last time you gave the inside of your mouth a close look? Your mouth shows early warning signs of health problems, including oral cancer. In particular, gum disease has been linked with diabetes, heart disease, and stroke. By inspecting the inside of your mouth, you can stay on top of changes that may be important to your overall health.

Jeebus give me the strength not to make a crude joke here.

Captain Clearance Strikes Target
Friday finally got better a little after 5:30pm when I got the configuration of the project I am working correct. Technically it was someone else’s work that was failing, but who am I to point fingers.

You may remember that I was supposed to play racquetball at 5:30pm, but since I had no idea when I’d be done with work I had to cancel for the second consecutive day. With a little free time now available to me I headed over to the Apple Store in Perimeter Mall and picked up my repaired iPhone 5 (they definitely fixed my old one instead of giving me a new one) and then over to Target.

I only had three things on my Target shopping list, but as I kept shopping the clearance end caps I kept dropping things into my hand basket. By the time I checked out I’d amassed $37 worth of goods, much of which had been discounted from its original price. Even better, the majority of the items are things I either needed immediately or will be of use in the near future.

50% Success Rate
I work early Saturday morning and was possessed by something to get me to watch YouTube videos on how to replace the in-cabin air filters on a 2002 Accord (i.e. the Jackmobile). I may lose my Man Card for saying this but up until a month or so ago I had no idea that cars had in-cabin air filters. So unless the Jackmobile’s were replaced as part of routine scheduled maintenance you may correctly assume that after twelve years they needed to be replaced. (side note: on Friday evening the Jackmobile eclipsed the 176,000 mile mark!)

As with any repair task these days YouTube is filled with “shade tree mechanics” showing you how to perform a certain task. I watch two videos and am glad that I did because each video contained vital information omitted by the other. In fact, I probably should have watched two more because as I found out when I disassembled the Jackmobile its set of screws were different than those showed in the two videos I watched. I managed to wrangle the glovebox from its place in the dashboard and replace the filters with the only collateral damage being one of the four retaining clips for the under-radio dash panel that I snapped off because it was the only way I could get the damned thing free. (The first video didn’t even mention taking the under-radio dash panel off, nor did it mention the fact the screw that lives behind this panel.) In all it took me about 4x the length of each YouTube video in order to complete the task. But I was successful!

I celebrated the rest of the day by playing some afternoon racquetball and then going over to the boss’ house for a barbecue.

Unfortunately Sunday morning’s maintenance possession did not go as smoothly. A few weeks ago I noticed that the shop light in my utility room had bitten the dust. Around 10:30am yesterday I drove myself up to Lowe’s to buy two fluorescent light tubes (boy how I miss having the East Atlanta Ace Hardware store in situations like these!). I managed to swap out the old tubes, which appeared to be spent, put in the two new tubes, and with fingers crossed flipped the light switch. Nothing. DANGEN! That means that the ballast in the fixture is dead. Years ago I purchased a shop light for a never-realized plant growing project so I unboxed it, only to find out that it plugs into an outlet whereas the one currently hanging in my basement is hardwired into a junction box. Though everyone assures me that this is a simple handyman fix I think I’m going to hire someone to come in and install and outlet in place of the junction box to make this repair a reality.

ITP Flickr Pic
“It’s Off To Work I Go” 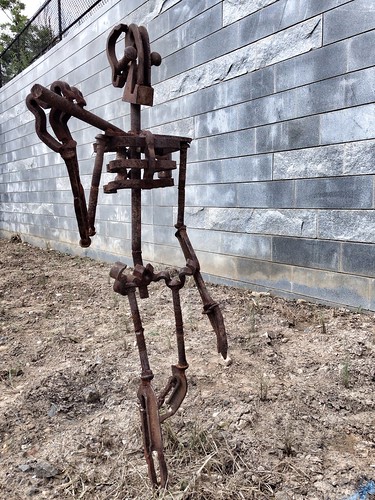 One of a set of three figures that are a part of the Atlanta BeltLine‘s art.

It must be nice to be young, pretty, and live right on the BeltLine like today’s birthday girl ITP-Reader Jenka.

Yesterday I Became A Redneck
No, I did not move into a trailer.

Yesterday afternoon the boss and I hiked the Atlanta BeltLine and around Piedmont Park. Because I failed to apply sunscreen (I’m an idiot) my neck is a bit red this morning. According to the MapMyRide app on my iPhone our journey took us two hours and we covered 6.66 miles.

While BeltLine construction progress is slower than I’d like to see I am constantly amazed how the BeltLine has transformed this desolate part of Atlanta into a budding vibrant region. Now if they had only installed light rail instead, or in addition…

The boss and I hung out at Argosy for awhile after our hike. I chose Argosy because I knew that they have very few televisions so the place would not be overrun with World Cup fanatics — I was correct.

Both need to be done before I skip town Thursday or Friday. And with plans already in place for tomorrow and Wednesday I need to make sure I make the time to do these.

Stats & Goals
Daily
Current Mood – not bad, a little sunburned and bummed that I’m still so fat.
Current Music – silence at the moment
Website Of The Day – While I am always impressed by my friends who complete BRAG I am super-impressed by Mike Evans’ plan to cycle across America.
Mode Of Transportation To Work – my car
Exercise (b)Log – Saturday = racquetball, ~90 minutes; Sunday = walking, ~6.66 miles
Morning Weigh-In – 217 pounds (2014-06-14), damn I am going to wrong way!

11 Responses to Possessed By The Devil