I think I got the math correct this time. 😉

Today’s Daily Challenge
Reflect on how an aspect of your personality has changed as you have gotten older.

Our personalities aren’t set in stone, and researchers have found that positive traits develop throughout adulthood. Many people become more conscientious and less neurotic with age. Recognizing small shifts in your personality can keep you in touch with how these traits affect your relationships, career, and habits.

You don’t want to know.

Well Hello, Decatur
I had agreed to meet my friend Mike at Twain’s on Friday after work. Looking at the traffic report I feared that my journey from Perimeter Mall to Decatur would take no fewer than ninety minutes to get there. Imagine my surprise when, driving only backroads and stopping once for gas, I was there in fifty minutes! I think that may be a new record or something.

Inside Twain’s I sat around waiting for Mike’s arrival and had a 12-ounce beer. Mike and I sat at the bar drank a few beers with diner and caught up on our lives. It was a very low key evening but a fun time nonetheless.

My Average For Home Repairs Remains Low; My Average For Watch Repairs Remains Fair
On Saturday morning I forced myself out of the house to buy a double lockset kit for the ITP Estate. One of the door knob locks has become unusable so I thought that I’d swap out the door knob lock and the deadbolts on two doors. I’d accomplished this task twice before — once when I moved into the house, and once after I was held up at gunpoint and surrendered all of my keys — but didn’t do it when I was broken into because those fuckers smashed a window and never compromised the locks. With this success rate I drove with confidence to Lowe’s figuring the job would take me no longer than an hour.

The other task I decided to tackle that day was to purchase new watch batteries in an attempt to replace the batteries in at least two of the dead watches that I own. In the past I’ve moaned about getting charged $15 to replace a watch battery for a watch that cost me “only” $70, so I thought it was high time that I tried to do this myself, especially since I saw a pack of five of the necessary batteries on Amazon cost less than $4 with free shipping. I went to Lowe’s, no luck; I went to Target, no luck; I went to CVS, no luck; and my last hope was the Intown Ace Hardware; Ace Hardware had the proper battery but for $4.49 each. I sucked up the cost and purchased two batteries and was on my way home to play Paulie the Fixit Man.

With the appropriate screw driver in hand I tackled the lockset first. I disassembled the troublesome door knob and took it off. I inserted the new door knob with only minor difficulty (I didn’t notice that there were two baggies of screws for each installation) and relatively quickly half of the first door was done! I then disassembled the deadbolt and removed it from the door. Man, this was going great. And then I tried installing the new deadbolt. What? It doesn’t fit inside the hole already drilled in this door? WTF?!?! This has never happened before! Goddammit. I was faced with two options:

Now with far less confidence I tackled the watches. Before going out I had successfully removed the back of one of two similar watches to find out what battery it needed. This was fairly simple so I knew that I could get these two watches running properly again. And I did. And it was good. And there was much rejoicing. I then tried removing the back of a different watch (I should say that I possess the appropriate tool for this job so it’s not like I am using a hammer and chisel). When I bent the metal wristband connector and severely broke one of the spring-loaded posts that keep the wristband attached I gave up on this watch as well as the notion of trying to repair anything else on Saturday.

Look At Who Became Lazy
For the rest of Saturday, at least prior to me going out to Theatrical Outfit for “CS Lewis On Stage” I sat around watching videos, mostly Jerry Seinfeld’s Comedians In Cars Getting Coffee and an hour long documentary about tiny houses. I must admit that I am intrigued about the thought of living in a tiny house, and since I will apparently never again meet a woman it appears that I won’t need much living space in the future.

My evening ended at Grant Central Pizza, because pizza sounded amazing and I couldn’t be bothered to drive anywhere else but to East Atlanta after the play. 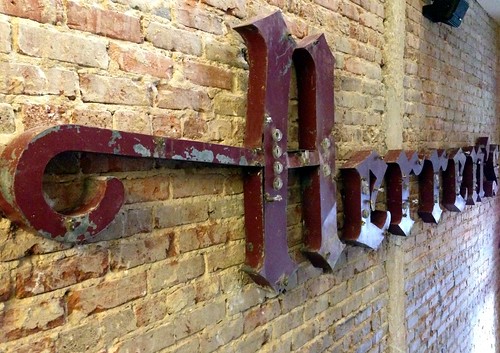 Theatrical Outfit occupies the space once used by Herren’s restaurant, one of the first businesses in Atlanta to integrate. This is the signage that used to adorn the restaurant.

I wanted to use Photoshop to “remove” the speaker seen in the upper righthand corner, but time just doesn’t permit me to do so at the moment.
I Nearly Went Hashing Yesterday
Yeah, you read that right.

I planned to make my triumphant arrival to the Black Sheep Hash yesterday, you know, as training for Brussels, but then I went and made 6pm racquetball plans with the boss. Any experienced hasher knows that there is almost no way in hell to get from the end of the hash to anywhere else by 6pm.

Stats & Goals
Daily
Current Mood – fair
Current Music – silence at the moment
Website Of The Day – Tumbleweed Houses manufacture and sell tiny houses.
Mode Of Transportation To Work – my car
Exercise (b)Log – Sunday = racquetball, ~90 minutes
Morning Weigh-In – 217 pounds (2014-06-14). I really should have gotten on the scale this morning but was scared