The title says the today is my birthday (because it is). Technically at the time I am writing this I am still forty-eight but by the time I am done, and definitely when you read this, I will have turned forty-nine.

I Was Wrong About Bremen
When I stepped out of the train station on Sunday I didn’t think that I would like Bremen; the city was far more busy and had more of an urban atmosphere than I was lead to believe. However, as my two days wore on the city wore on me.

The “altstadt” area has some amazing architecture, a lovely riverside walk, and I found a couple of places to eat good meals and drink local beers.

While I did find a sporting goods store in town I was unable to locate a German soccer jersey for me to buy. Oh well, a Euro saved is a Euro earned. 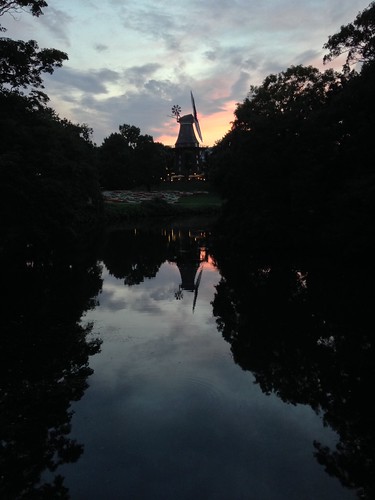 I have seen many modern-day wind turbines in Germany, but this was a first for me. Actually, I think it’s a restaurant.

Two Wonderful Purchases Yesterday
While walking through town I found Rossmann, a small drug store chain. Inside I purchased a(n unfortunately carbonated) bottle of water, as well as two very helpful items â€” nail clippers, and flushable wet wipes. Normally I would have nail clippers in my toiletry bag, but I purchased a new one for this trip and didn’t thinking about packing them. The wet wipes were a godsend yesterday, let’s just say that a German toilet paper has been a bit harsh on my American bottom; I should have thought to buy these my first day in Frankfurt.

I Found A Use For Euro Coins
A few times now I have had to use a public WC. It has not been uncommon to have someone outside the WC collecting change, or in two instances I encountered automated WCs that require coins to enter.

Auf Weidersehen, Deutschland!
Today I am on another train, this one taking me from Bremen, Germany to Amsterdam, Netherlands. If all goes to plan my train is due to arrive in Amsterdam at 15:00.

Somehow I don’t think that this will be my last trip to Germany before I die. It would be nice if I were better at speaking the language, but I have been thinking that for twent-five years.

I am getting out of the frying pan an jumping into the fire as I leave a country where I have at least a little capability of speaking their native tongue to one in which I have no hope. I keep finding the English may be spoken the world around, but there are no guarantees.

For the remainder of my birthday I am going to try to relax, have a wonderful dinner, and have a lot of fun. Holy shit, Amsterdam better be fun. I just booked my hotel and, with very few options available even midweek, I am spending more than I would normally for a hotel room. When I talk of returning to Europe next year, kindly remind me how much money this trip cost me. Yowzers!

It’s funny to think that exactly one year ago my coworkers Chrissy and “K” took me out to Monday Night Brewing and then to Flip Burger for my birthday; and now they have both moved out of Atlanta and I will be in two different European countries.