Back In The USSR, Um, The US

Well hello there! I am indeed back on US soil and may have even already adapted my sleeping habits to avoid jet lag, though I’ll find out for sure later.

Europe 2014: Hits And Misses
I am going to recap some more of the trip; here are some of the things (off the top of my head) that went right and wrong.

Hit: The Experience
I wish I hadn’t waited nearly forty-nine years to visit Europe. It’s not like I’ve never had the opportunity. For the first forty years of my life I despised traveling alone, and since you know my (near nonexistent relationship history…). Oh well, can’t change the past.

Returning to Germany to see more of the country is definitely on my “Before I Die” list, and I hope to be able to communicate in German better the next time I return.

Miss: Packing
I was not the only one expecting the weather in Europe to be cooler than it was. I packed too many pairs of underwear and not enough t-shirts or socks. Let me explain why I say this. I quickly discovered that I could wash a few pair of underwear at the hotel and hang them dry in two full days, whereas shirts, shorts, socks each took longer to dry. Even though I was traveling alone and could wear certain items of clothes a second (or third) time, I’d liked to have had fresher options but wasn’t willing to go clothes shopping.

Hit: The Weather
It was hot and I sweat a lot over the past two weeks. However, I did not see any real rain until I was awaiting boarding of my flight yesterday (good thing I screwed up and booked my return flight a day early than I had anticipated). Of course I will give myself a bit of credit for this for missing the rain because I chose to take the train to Bremen instead of Cologne because I saw that it was suppose to rain in Cologne.

My REI rain jacket never got worn once!

Hit And Miss: European Rail System
While not as cheap nor convenient (due to delays and breakdowns) as I was hoping it would be I was able to travel about Belgium, Germany, and Netherlands for two weeks without renting a car thanks to the European train system.

I spent more than expected on train tickets because I kept booking at the very last moment and getting fully-flexible tickets which allowed me to take any train necessary to reach my destination.

Hit: Brussels’ Public Transit
Confusing at first, the Brussels Public Transit system is on it! I wound up taking the train every day, at least once a day, to get to places. My hotel was two blocks from a Metro station and though on one occasion I found the rail line shut down because of protest, this made the Metro very convenient. As an added bonus I only had to walk two blocks from my hotel yesterday morning in order to take an express bus to the airport costing me only â‚¬4.

Miss: Hash Food
I don’t expect haute cuisine at hashes and I wasn’t let down. For the hash we were fed only dinners and they were nothing to write home about. To be fair it’s hard to feed over 2500 hashers, so to their credit the food was ready for us each night at the appointed time.

Hit: The Rest Of The Hash Experience
The hash was great, and although I didn’t meet many new hashers outside those I already knew from Atlanta it was an enjoyable experience.

Hit: The Rest Of The Food I Ate
If you know me you know that I love to do two things bitch and moan eat and drink. And boy howdy did I ever eat and drink! While neither good for my waistline, liver, or kidneys I think I can honestly say that I drank at least two beers every day.

On many occasions I had much difficulty deciding what I wanted to eat, or in the case of Brussels finding restaurants that were not “foreign” food. I’m sad to say I ate one or two too many meals at Irish pubs because it was my default “go to” option.

I ate pork (in many different ways) in Germany, finally found mussels in Brussels (but oddly no sprouts), and ate that wonderful sausage dish that I posted last week in Amsterdam.

One thing I should have used more of were the hotel breakfast bars. I think I only ate breakfasts at them three times, either because I wasn’t hungry in the morning, didn’t realize that the hotel had a breakfast, or was on the move and couldn’t be bothered with worrying about food.

Hit: The Beer
I loved much of the beer I drank, especially the Rauchbier (Smoked Beer) that I had in Bamberg.

Miss: Hotel WiFi And Le Tour
Never was my hotel WiFi good enough for me to use the Tour de France app for watching video of the event. Of course I probably could have watched it on television, but didn’t think about that until now. C’est la vie.

Hit: Walking
I walked, and I walked, and then I walked some more. I have no idea just how much I walked during the past two weeks, but I did enough to lose two pounds even though I ate and drank everything that was put in front of me. The only damage done to my feet has been one water blister on my right pinky toe. I think that I’ll survive.

Hit And Miss: Photography
Turns out that even taking a smaller version of a quality camera is no guarantee that you will use it. I have to go through the single SD card I used on this trip, but I bet you that it’ll contain no more than fifty photos. Most of what I shot, perhaps another fifty photos, were done with the iPhone 5c.

There are many reasons for this outcome:
1. I want to take most of my photos at the “Golden Hour” (right as the sun rises or sets) and that’s hard to do when the sun is rising by 6:00am and setting after 9:00pm.
2. If it’s in the bag it’s not ready to be used, but I didn’t want to carry it all the time.
3. I didn’t bring a computer and getting photos onto the iPad (especially when trying to minimize hotel time) is tough. iPhone/iPad shots are much easier to send to Flickr.

I’m not too upset, I’ve been burning the memories into my memory every day.

Miss: Too Many Euros Brought Home
Having attended past hash events (smaller ones than these and all in the US) I should have realized that I would not need as much cash the final three days and spent more of my Euro during the front end of the trip; I returned with nearly â‚¬800. I probably should have also kept better track of how much I had remaining by the time I checked out of the hotel yesterday because had I done so I could have paid for my hotel in cash instead of on credit card.

An addition “Hit” goes to American Express (at least the one I carry) for not charging any foreign exchange fees on my transactions.

A Few ITP Flickr Pics
I am going to post a couple of shots from the trip each day this week. Don’t worry, I don’t plan to bog you down with the entire slide show. 😉 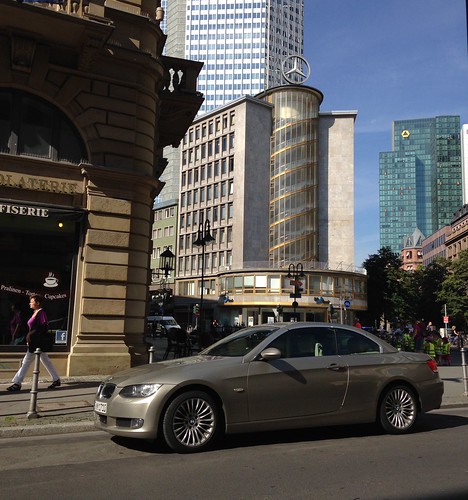 Sitting at a cafe in Frankfurt I saw this composition and it made me chuckle, so I shot it.

“What You Get When You Ask For ‘The Best'” (Bramberg, Germany) 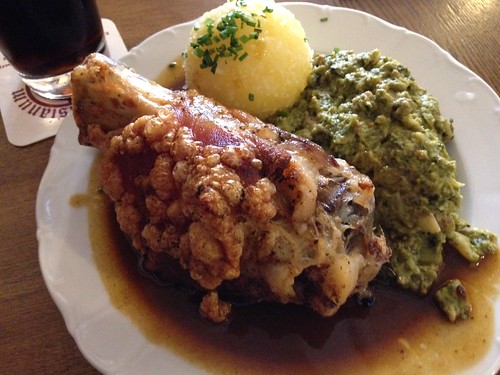 In my worst college German (which I took in 1988/1989 for anyone interested in perspective) I asked the pretty waitress to tell me what the restaurant’s best plate was.
Her response was “Do you eat meat?”
I replied “Naturally.”
And that is how I wound up with pig’s knuckles (“Schweinshaxe”). Honestly, it was pretty good.

Home, Not So Sweet, Home
Jeez, another house on my street has been put on the market.

I hadn’t been in the house more than five minutes before I realized that my next mission is to sell. I walked into the “master” bath, flushed the toilet and watched about two tablespoons’ worth of water run from the holding tank into the bowl via a new leak in the gasket that marries them. Let me remind you that this toilet has been in place for approximately sixty years, I don’t see this being repaired without a struggle.

I now officially announce the beginning of Operation: Happy Ending! Oh wait, I may want to rethink that name.

5 Responses to Back In The USSR, Um, The US