(by the way, I’m staying free-form for the remainder of this week and come August will be returning to my old format)

Last night the boss, who has just returned from nearly two weeks in Hawaii with his daughters, and I played racquetball and then headed to Taco Mac for dinner. My local Taco Mac has changed for the worse during the past three weeks, or perhaps it’s just that my perspective has changed? Regardless, the experience was no where near as enjoyable as it’s been in the past.

Hey Wait A Minute Mr. Postman
As I have done every time I have left the ITP estate for more than a week I requested the post office to hold my mail while I am gone and deliver it to my house on the day I return; until this trip this scheme has worked flawlessly.

On schedule I received an email from the post office on Sunday altering me that my mail hold was about to end and they would deliver my mail on Monday. However, when I finally returned home on Monday I did not find a bulk-wrapped pack of mostly junk mail, instead I found my mailbox door open and inside was one single large card saying the following:

POSTAL CUSTOMER
This card was placed in the receptacle to indicate a VACANCY. The carrier will not deliver mail to this receptacle as long as this card remains in it. Upon occupancy, please remove the card, list the fill names ALL of that will receive mail at this address and deposit the card in the mail box and raise the flag.

Why would I desire to have the post office hold my mail while I was away?

What has this card done? Well, it certainly has indicated to anyone interested that I am not at home, it says so right on the top line! And leaving my mailbox door open invites interested parties to read the card. Fortunately no one took the opportunity to break into my house. Things are not okay however.

As instructed I filled out the card, deposited it into the mailbox, and raised the flag. I even put out my recycling bin yesterday to further alert the postman that I was home again. And when I arrived at home yesterday? No mail. Card still in mailbox. Mailbox flag still raised. Was yesterday a postal holiday about which I did not know? If not, I will have some choice words for my local postmaster if my mail has not been delivered by the time I arrive home tonight.

Of course, this could be the work of someone who has already stolen my mail. It might be time to pay very close attention to my credit card and bank statements. 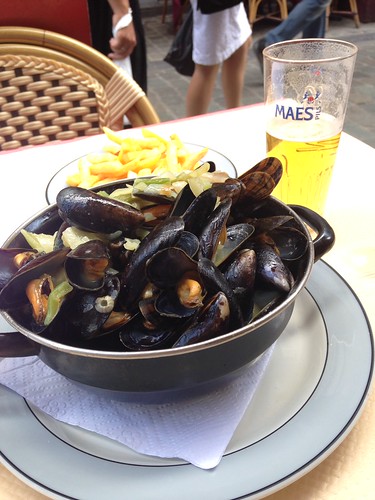 On my one “free” day in Brussels I convinced myself that I must eat mussels, after all, they are one of the area’s delicacies. After finally finding the “mussel district” (not really, I just made that up) and then having two high-gravity beers at Delirium Cafe, I picked out a restaurant and ordered mussels and fries, served with a beer for â‚¬10. They were delicious.

“The Butt Of The Lion” (Waterloo, Belgium) 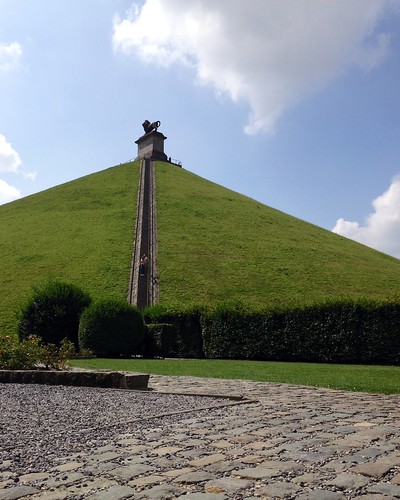 Okay, it’s really Butte de Lion, and it is a monument constructed at Waterloo for William II of Netherlands. In case you are wondering there are exactly 226 steps from bottom to top (and just as many from top to bottom). After walking the “DC Men’s Hash” on Saturday “Deposit Slit, Robin Red Breast”, and I climbed the 226 steps to the top. Guess what happens to a person who is afraid of heights after he climbs 226 steps straight up? That’s right, you won’t be seeing any photos from the top because I was too frightened to take any while up there. I thought the gradual incline would insulate me from the feeling of being really high, but from one vantage point I could see the top of a large building next to this monument and that’s all it took to freak me the fuck out.

Clicking off another year on life’s odometer has brought the return of introspective thinking. I’m forty-nine. Reasonably I have twenty “good” years remaining; what do I want to do with them?

Owning the ITP estate, with its increasing number of foibles, is not high on my list. In August I will begin clearing, cleaning, and fixing (and hiring to fix) in ernest with the hopes of placing it on the market before year’s end.

I want to be in better health, which means that I need to start exercising regularly and not just when ever I feel like doing so.

And then there’s this whole decade of being alone to shatter.

I’m just trying to make it a fun ride.