It’s Thursday already? Huh. Seems as if I thought that I would be much further along on the work to-do list I created on Monday than I am.

Today’s Daily Challenge
Step from left to right as you sweep your arms above your head and back down again.

By waking up the muscles in your core, this move will help you feel more energized from head to toe. Working the muscles in your back and torso provides your body with a strong and flexible foundation, while moving your legs at the same time raises the intensity and gets your blood pumping.

The muscles in my core are dormant, and as tired as I am right now I’m okay with that.

Work And Walk And Tangentially Play Team Trivia
Yesterday was a rather unproductive work day. In fact, I might have even gone backward in productivity by identifying a large code change that I will have to work on today.

Yesterday I mentioned the possibility of George’s but that fell by the wayside when the boss mentioned walking around the work neighborhood and with the traffic I saw yesterday around Perimeter Mall I was in no rush to get into a car. We walked about four miles before the state of my left shin caused me to cry “Uncle” and quit.

That hour’s walk did little to reduce traffic but given that it appeared to be better heading ITP rather than OTP we gambled (and somewhat lost) by driving down to Brookhaven to hang out with our new-favorite bartender Lyla at Lucky’s Burger and Brew.

For the second night in a row the boss and I stumbled into a bar hosting Team Trivia. Given that it’s always just the two of us we didn’t play, but we watched the team of three — two nerdy guys and a nerdy gal (who I’m not sure answered a single question) — win it all. My boss is a Clemson grad and when he identified the rings on the dudes’ hands as being those from Clemson he struck up a conversation with them even though there must be a good twenty-five year difference in their graduation dates.

While I could have provided the youngsters next to us with answers the brain trust on their team clearly didn’t need my help. It wasn’t until the final question when I confirmed that “Motor City Madman” was Ted Nugent’s nickname and not that of any of the four sports stars provided that they acknowledged my skills. 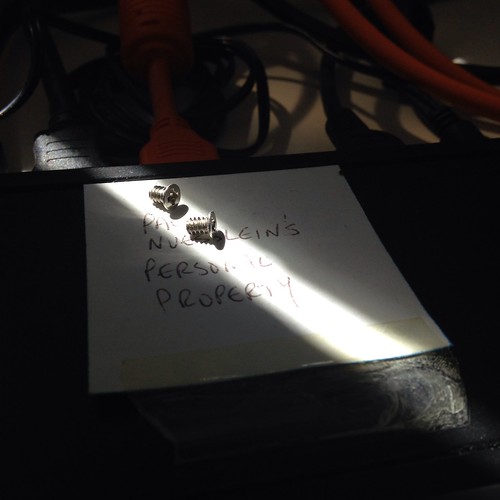 Photography is all about capturing the light. When I glanced across my desk yesterday afternoon and saw this single strip of light in line with the two screws I grabbed my iPhone and snapped this shot. Look closely, you can see almost the entirety of my full real name on that Post-Itâ„¢ note.

Standing In Line Finally Pays Off
The Jackmobile was in serious need of gas this morning (otherwise I may have taken MARTA to work) so I drove up to the QT on Briarcliff on my way in. Because all I ate last night was a salad I was hungry so I went inside to get a drink and a sausage biscuit. I had picked out a blueberry/pomegranate juice to go along with my 99Â¢ sausage biscuit but as I waited in line I found myself next to an ice cooler filled with Minute Maid Berry Blend juice-drink and signage that read “Get a free sausage biscuit with the purchase of a Minute Maid Berry Blend drink” and my decision was altered. A quick walk back to the cooler case to return my original drink choice and soon I was walking out with a breakfast that cost me a whopping $1.88.

One Of These Days…
One of the items on my unofficial “Bucket List” is to ditch work and go to an afternoon baseball game. Today would be a great day to achieve this by heading down to Turner Field for the Dodgers v. Braves game at noon if not for the fact that I have so much work to do.

Start Planning Your Weekend Now
Although it appears that a good portion of Sunday will be spent working on a demo that I need to present next week, Saturday will be a day of pure pleasure.

On Saturday afternoon / early evening I’ll be a spectator for the annual Lightspeed East Atlanta Criterium (holy shit is that a Facebook link? Yes, it’s the only link I could find online). Unlike last year the weather is predicted to be sunny so I will charge up the Nikon D300 and be ready to make my annual attempt at cycling photos.

Later on Saturday I’ll be headed to Smith’s Olde Bar for the The Whiskey Gentry show. The Whiskey Gentry is a local country / bluegrass band that I finally heard and enjoyed at last year’s BBQ and Bluegrass Festival in Evans, Georgia. I’m looking forward to hear them perform again.

As a side note: The Whiskey Gentry is also performing a Smith’s tomorrow night if that suits your needs better.

Today’s Personal Project
Seriously, I need to go to the bank and cash in the Euros I’m holding. If I don’t soon I just might be tempted to book another trip.

Stats & Goals
Daily
Current Mood – okay, normal ailments and very tired
Current Music – silence at the moment
Website Of The Day – One of the things to which I was introduced last week was Malvi‘s marshmallow square treats. I enjoyed the free sample provided to me, but I can’t let myself make purchases such as these at this time.
Mode Of Transportation To Work – my car
Exercise (b)Log – walking, ~4 miles
Morning Weigh-In – 215 pounds, checked earlier in the week