Who Needs 6.3 Pounds Of Green Beans?

After eating a slice of pizza with a Pepsi for $2.76 last night I did some shopping at Costco preparing for the work lunch I am planning to make tomorrow; I wound up purchasing a 6.3-pound can of green beans.

My initial menu involved cooking a turkey breast, which I could find none of at Costco and the smallest one I could find at Kroger was nearly eight pounds and frozen solid, in my crockpot. Because of this failure I’ve switched to chicken breasts. That’s okay with me, I’ve always liked smaller breasts. Have I said too much???

This morning I stopped at Publix and bought some onions and red potatoes (because it was clearly too hard to remember to buy those at Kroger last night) that I’ll toss into the crockpot with the chicken. The hardest part of this meal will be starting the cooking process early enough to ensure that it’s all done by noon. For this I will be doing some cooking time research later today. 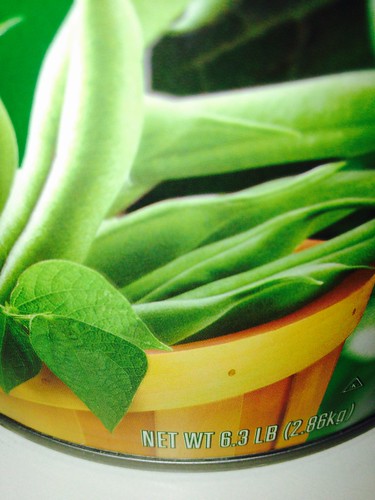 But why so many beans? It’s not like I am serving an army of people. It’s simple, cost. The mega-can cost me a little more than $3 while a multi-pack of reasonably-sized cans were over $7. I’ll cook up (read “microwave”) most of the beans tomorrow and keep some in reserve for a meal or two during the remainder of this week.

Last night I allowed myself forty-five minutes necessary to catching up on The Amazing Race (I have a couple of couples that I would like to see get eliminated very soon, including the one that seems to be a over-tanned and white-toothed juggernaut). I’m sure that the ITP-Reader Barb household was also disappointed to see the fire fighters eliminated so soon; they appeared as if they’d be a funny duo to follow for longer in this race. Once again I am interested in visiting Scotland, most likely in the summer of 2016.

Once I was done with the race it was time for me to hit the books and attempt to do my German homework. I still have more to do, but at least I will be able to carve out a little time this afternoon to do it.

And now it’s time to make the code.

3 Responses to Who Needs 6.3 Pounds Of Green Beans?