That will be my moniker this weekend. Upon arriving home last night, after waiting out another shitty night of Atlanta traffic by eating some delicious carnitas at Los Bravos on Johnson Ferry / Ashford Dunwoody, I realized that my neighbor must have moved out because her house was lit, and there was nothing inside of it.

It didn’t take long inside my own house for me to conclude that the clutter is depressing the hell out of me. In addition to the already-scheduled programming this weekend I will be moving crap out of the house and putting crap into the appropriate storage spaces. By weekend’s end I hope to have a living space that doesn’t bug the hell out of me.

ITP Flickr Pic
“Am I Bugging You?” (Black Mountain, NC, US) 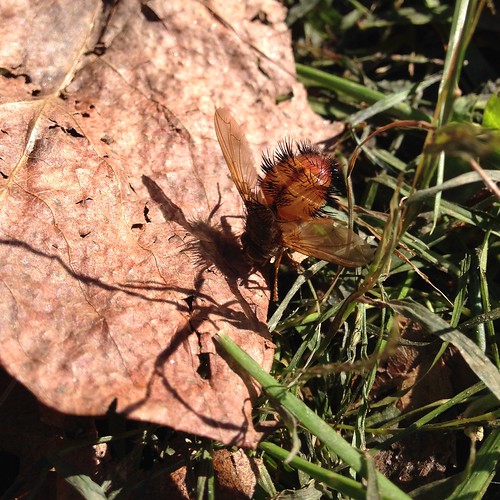 Speaking of bugs, this little guy (or gal) was wandering through the grass at LEAF while ITP-Reader Randy and I sat on a rock waiting for his kids to finish getting their henna tattoos. I was intrigued because I thought that it was a bee at first, but closer investigation and close-up photography using cell phones (amazing!) proved me wrong, although I still don’t know what type of insect it was.

Tomorrow, Tomorrow, I’ll Love You Tomorrow
As previously mentioned I will be volunteering tomorrow at the Georgia Craft Beer Festival. I will be working Shift One (noon-3) and have been told that I’ve been assigned to the Coastal Empire Beer Co. table. From what I see on their website, Coastal Empire is from Savannah and brews three beers, two of which — Savannah Brown Ale, Tybee Island Blonde — will be available for tasting at my table tomorrow. It’s a pity, for me, that they are not bringing along any of their pale ale as well. If you are at the festival please stop at my table and say hello.

Sunday, SUNday, SUNDAY!
I hope to see some of you either at The Midway Pub or in Grant Park on Sunday as well. Ask me how my decluttering is going… 🙂