I Wish I Had Revolutionary Information

As I mentioned yesterday my life is in a rut. I made it down to Colony Square last night for German, which was fine, but I feel as if I’ve hit a roadblock in my progress. I think I need to figure out how to get more immersive with the language which is difficult because I chose German instead on Spanish. A decision that is par for my life’s course. Perhaps I’ll find a way to budget for a trip to Germany next year. 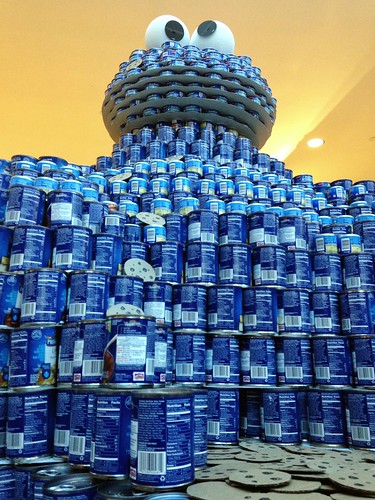 As I walked into Colony Square last night for my German class at the Goethe Zentrum (nee Institut) I saw that there were art installations, constructed from mostly canned goods. Apparently the installation will be there for a little while and once over, the cans/packages of food used for the artwork will be donated to food banks. This Cookie Monster, comprised of 3990 cans of food (!), is part of a series of art installations put on by Canstruction.

I’ve also come to realize (again) that I am spending too much of my life thinking / working on the app that pays my bills. I love programming but I am pigeonholed by this one application and am also not advancing in any way that’ll help me change course in the near future. I have my reasons.

“A garbage truck, a school bus, and the Jackmobile drive on the same road…” It was no joke this morning when I found myself behind a garbage truck and a school bus while driving along a two-lane road. Fortunately for me the garbage truck turned relatively soon and the school bus pulled off and let some of us pass. Of course, this just meant that I got to the stopped traffic at the nearby elementary school that much sooner. Have I whined about my commute enough recently? I swear that the office move to Perimeter Mall six, perhaps seven years ago, started a downward slide in my lifestyle. If only things had worked out differently about this time last year.

On a positive end note, it was good to hear from ITP-Reader Martha again yesterday, I’m glad that I’ll be consuming Tasty China on Friday night, and tonight is all mine; I think I might go for a long walk after work.

3 Responses to I Wish I Had Revolutionary Information